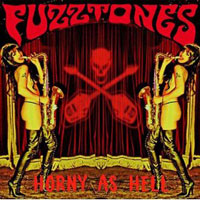 Now there’s a concept: take classic garage-punk songs from the 1960s (plus a fistful of Fuzztones originals) and put together new arrangements that add…wait for it…a horn section. No kidding. The Fuzztones have been at it for a long time, keeping the flames of 60s punk going. The hallmarks of that genre — snotty vocals, fuzzed-out guitars, cheesy organs — have provided a seemingly endless well of inspiration (yes, inspiration is not too strong a word) for these American expats.

But on their newest, Horny As Hell, the Fuzztones opt to push the boundaries of their chosen genre just a bit. The guitars are a bit less fuzzy, and instead feature more distortion in an early 70s style. The Farfisa Compact Duos and Vox Continentals are joined by what sounds uncannily like (shudder!) a Hammond B3. And then there’s brass. Thick, beefy horn sections are worked into the arrangements of pretty much all of the disc’s seventeen tracks. Sometimes it works: the album opener, a forceful cover of the Mickey Finn’s “Garden of My Mind” truly benefits form the horn charts. But sometimes it doesn’t work quite as well: the remake of Fuzztones chestnut “Brand New Man” features squawking saxophone and simple horn charts that could easily be played on a keyboard synth. Not so great, that.

Yet as always, the group’s choice of material is beyond question. They dredge up “Girl, You Captivate Me,” a non-hit for no less than ? and the Mysterians. And on that track (as, it must be said, on most of the album) the horns really do add to the enjoyment. They also cover two amazing songs familiar primarily to fanatics: the Moving Sidewalks’ “99th Floor” and The Pretty Things lost classic “Alexander.”

Props to Rudy Protudi and his cohorts for pushing the boundaries of what can oftentimes be a constricting subgenre. The use of horns is a radical enough departure that the group could run the risk of alienating its fan base, but it’s a worthy excursion. It’s not as if the Fuzztones leavened the disc with new material; the originals are mostly (if not all) remakes of old Fuzztones songs. But that’s nitpicking. The songs are ace, with few missteps. It would be a gas to see and hear these arrangements live, but sadly The Fuzztones — now firmly ensconced in their adopted European continent — rarely venture stateside.

Read a review of Illegitimate Spawn: A Tribute to The Fuzztones.