Veruca Salt: Rocking Out from a Centered Place

“People always told me that [former co-leader Nina Gordon] brought the pop and I brought the rock — I thought we both brought both — but clearly we were going in different directions, as clichéd as that sounds.” Louise Post believes that Gordon and she shared a musical vision, one that Louise continues with the current lineup of Veruca Salt.

In light of Gordon’s 1998 departure, it might be difficult defining what gives Veruca Salt their signature sound. Post explains it: “the way that my songwriting developed — alongside Nina and with the original band members — was something I wanted to stay true to. What really makes me tick [is that] I love to rock in an epic fashion, with loud, balls-to-the-wall, Armageddon guitars; with melody, harmony and whisper-to-a-scream vocals. All of that hasn’t changed,” she contends. So, what has changed? “Personal growth. The things that happen to individuals through growing up, I guess.” 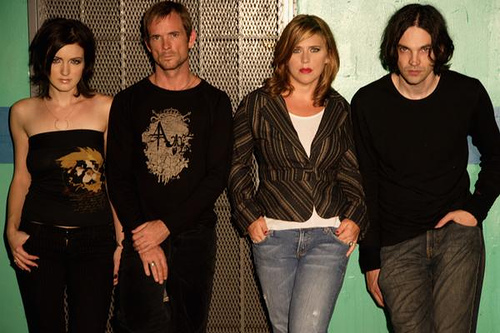 Post doesn’t believe that IV represents a new approach for Veruca Salt, but it is different: “I’m coming form a more ‘centered’ place; Resolver was pure catharsis for me — an album that demanded to be made — and it came from a place of desperation. It was a purging of sorts; I guess all my records are for me — they tend to be autobiographical — but that one was really personal for me. IV was created over time…it wasn’t recorded in such a frenzied state; I think it’s a more mature record.”

The centered place of which Louise speaks had a major influence on her state of mind during the run-up to creating IV. “After the frenzied pace of writing and recording — a [pattern] that doesn’t really give an individual any kind of repose — I gave myself that time. I collected myself and my thoughts. I moved out here to L.A.; I started doing a lot of hiking, getting out in the sunshine, getting back in touch with my family and best friends, spending time with my boyfriend. I actually [started] having a life outside of being a musician.” This centering time helped Post reacquaint herself with the things that made her want to play music. And it helped her craft the roaring return that is IV.

It’s a blessing and a curse to be a creative person. I don’t feel like I’m totally alive if I’m not creating.
–Louise Post

The songwriting continued throughout her sabbatical. “It’s a blessing and a curse to be a creative person. I don’t feel like I’m totally alive if I’m not creating. And part of creating is releasing albums. That’s what I do; that’s the responsibility of the artist. That’s [part of] what’s kept me going; the feeling that I don’t have a choice, that this is what I do.”

At shows, many longtime fans still clamor for the old hits: “a lot of people come see us just because they loved ‘Seether’ in ’94, ’95. I tend to want to drop that from the set, but…we’re playing the show not for us, but for the fans. We want everyone to hear our new stuff, of course, but we want everyone to have a great show. Not just us.” And while Post admits that she likes to “play things exactly as they are on the record,” drummer Kellii Scott’s influence means that she can just “let him go” and change the songs’ underpinning a bit. She believes this departure makes for a more exciting live experience.

Yet in concert it’s clear that Nina Gordon is missed on some level. Louise allows that “I was thinking about her a lot on this last tour. Coming in contact with so many hardcore Veruca Salt fans that have been around since the beginning, and seeing their joy and excitement at seeing the band again, I found myself wishing that she could be there for that. Because a lot of that love was meant for her, too.”

Overall, Louise Post is more optimistic than she’s been in years. And while she and the band are focused on working IV for all it’s worth, Post is already writing for the eventual followup. “It feels like all the stars are aligned, and everything is happening the way it’s supposed to. I’m not having to break down any walls, or do anything that doesn’t feel perfectly natural to me. And I like it that way.”