Los Straitjackets: A New Twist on an Old Sensation 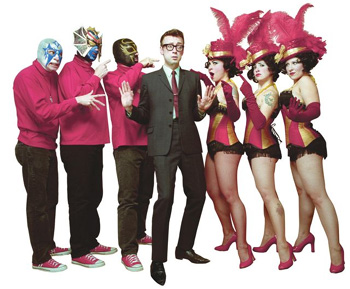 Legendary instro-rockers Los Straitjackets have taken worthwhile stylistic excursions before. While their primary métier is surf music, they joined with a host of vocalists for 2001’s Sing Along with Los Straijackets. And their upcoming release–Rock en Español, which should hit the streets by the time you read this–will feature vocals by the front-men of Los Lobos, Big Sandy and even Thee Midniters.

But back to Twist Party. With it, Los Straitjackets have created something new that evokes something old. “That’s a perfect way to describe it,” agrees guitarist Eddie Angel. “We don’t want to be something retro, but we want to evoke [the music that] we love.” Overall the Los Straitjackets guitarist professes undying love for “50s rock and roll and 60s garage,” and takes vigorous exception to the notion that rock was a wasteland between Elvis’ army induction and the Ed Sullivan debut of the Beatles. “A lot of great records–some of my favorites–came out of that era.” The musicians’ love for the twist era is evident on this fun mix of covers and instrumentals. 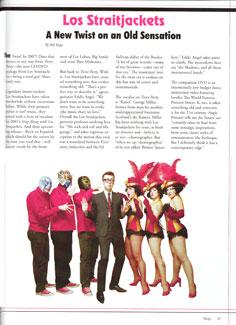 The vocalist on Twist Party is “Kaiser” George Miller, former front man for another underappreciated foursome, Scotland’s the Kaisers. Miller has been working with Los Straitjackets for years, as both art director and–believe it or not–choreographer. But “when we say ‘choreographer,’ we’re not talkin’ Britney Spears here,” Eddie Angel takes pains to clarify. The antecedents here are “the Shadows, and all those instrumental bands.”

The companion DVD is an intentionally low-budget dance instruction video featuring lovelies The World Famous Pontani Sisters. It, too, it takes something old and reinvents it for the 21st century. Angie Pontani tells me the Sisters’ act “certainly takes its lead from some nostalgic inspirations, from some classic styles of entertainment like burlesque. But I definitely think it has a contemporary edge.”