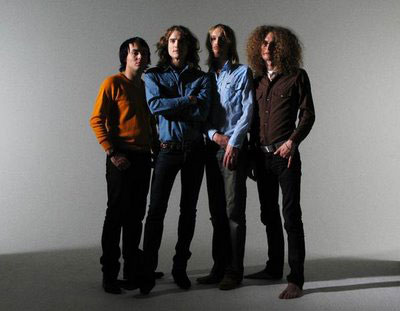 Even in the 21st century, the vagaries of transatlantic phone calls are such that bad (or dropped) connections are routine. So it was thanks to some persistence on everyone’s part that this interview even took place. We only got a bit more than halfway through the list of questions, but even in our brief time conversing, we covered the high points.

Dungen (rhymes with “onion”) is Swedish, you see. The group is led by Gustav Ejstes. Gustav labels Dungen’s music “fokrockpsych.” Not exactly retro, Dungen carves out a thick, swirling, yet unfailingly melodic slab of rock that does evoke the work of some great groups of yesteryear. Yet it’s unique. The folk element is perhaps closest to early Traffic, the Incredible String Band, and even Fairport Convention. The psych influences range from Blue Cheer to Black Sabbath. Yet again, the point must be made: this is not your dad’s psychedelic music. Dungen is thoroughly modern. But arguably it’s not really a group at all.

In the studio, composer/lyricist/multi-instrumentalist Ejstes does nearly everything, including engineering and production. The one duty he cedes is lead guitar (and some bass) work. That task is ably handled by Reine Fiske. Reine also handles one other duty: interviews.

Reine makes it clear that on Tio Bitar (translated as ‘Ten Pieces”), Dungen’s latest release, “arrangements and everything are all [Gustav Ejstes’]. They have always been. I should get some credit, but it’s ninety-nine percent him.” So does Ejstes sketch out Reine’s parts for him in the studio? “I would say it’s about 70/30. [Ejstes] has a very good idea of how it should be approached. I’m pretty much free to do what I want, but each song has its particular groove.”

On the track “Gör Det Nu,” the arrangement evokes a disorienting feeling, one in which things are moving simultaneously fast and slow. King Crimson elicited this same effect with some of their Discipline-era work. Fiske says that the lyrics to “Gör Det Nu” (which, like all of Dungen’s songs, is sung in Swedish) deal with the concept of “not doing anything, when you should do [something].” So even though the lyrics are indecipherable to American ears, the lyrical tension is conveyed through the music. Reine observes that “Gustav writes lyrics in a very, uh…I mean, they’re very personal to him…but they’re pretty surreal. Lyrics can be — and should be — important, but in some ways they’re just another instrument.” 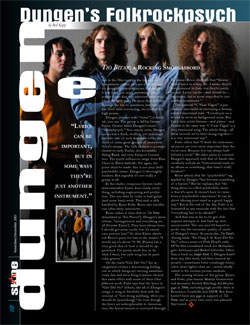 Fiske offers that “I think the instrumental pieces are even more important than the vocal ones. Because you can always hide behind a vocal.” He takes pains to compare Dungen’s approach with that of bands who cavalierly include an “instrumental track on an album as something…that wasn’t really finished.”

Reine admits that the “psychedelic” tag applied to Dungen “has become something of a barrier.” But he explains that “the thing about so-called psychedelic music is that it’s open. It doesn’t have to come from a ‘psychedelic experience.’ It can be about altering your mind in a good, happy way.” But at the end of the day, Fiske is as frustrated as any musician with the fact that “everything has to be labeled.”

And that was as far as we got. Subsequent attempts to link back up were unsuccessful. The one area I’d hoped to probe was the cinematic quality of much of Dungen’s music. In particular, Tio Bitar‘s closing track, “En Gång I År Kom Det En Tå,” echoes some of Pink Floyd’s early 1970s film soundtrack work for Michaelangelo Antonioni and Barbet Schroder. Other than a track on Jungle Book 2, Dungen hasn’t done any film work, but their musical approach — sometimes bone-crushingly heavy, other times lighter than air — seems ideally suited to the motion picture medium.

The touring version of the group (Ejstes and Fiske, plus bassist Mattias Gustavsson and drummer Fredrik Björling) did 60-plus gigs in 2006, including high-profile dates at Bonnaroo, Coachella and SXSW. But there haven’t been any gigs in support of Tio Bitar, and at press time none was planned. Stay tuned.