American Minor – Winning Over Fans, 942 at a Time 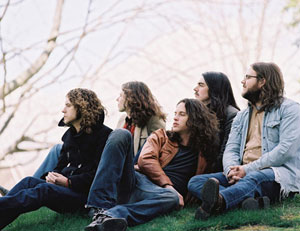 “We’re still paying our dues, man.” So says Rob McCutcheon, vocalist for West Virginia rockers American Minor. Their schedule sometimes finds them performing their classic rock styled originals to audiences who have no idea who the hell these guys are. In March they opened several dates supporting Drive By Truckers, including the set I witnessed, for an SRO crowd at Asheville NC’s Orange Peel. After McCutcheon introduced a few unrecorded numbers by saying “we’re gonna play a few new ones now,” guitarist Bud Carroll quipped, “they’re all new to these guys.” Yet the audience responded ecstatically, proving there’s always a market for straight-ahead rock when it’s played convincingly.

The American Minor sound echoes the best of The Faces, Humble Pie, even Thin Lizzy. “The music of the late ’60s and ’70s still sounds fresh to us,” explains McCutcheon. “We’re interested in continuing on in that tradition, [which] sounds more timeless than a lot of what’s going on now.” 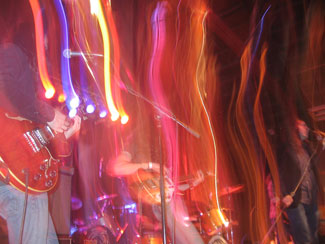 Their self-titled debut album reprises two songs from their 2004 Buffalo Creek EP, but in new versions that move them even further into rock territory. Rob explains the shift: “In ‘early’ American Minor we had another guitarist. We were ‘alt-country,’ a little like Whiskeytown.” The American Minor long-player is a more fully realized effort. “We were a lot more picky about what went on the album. The EP was more of a quick recording.”

The quintet has a few things to say while cranking out power chords and riffs. “Buffalo Creek” is a vignette set against the backdrop of one of the deadliest floods in US history, a 1972 dam collapse blamed on negligent strip mining. Over 100 people died, and four thousand-plus Americans were suddenly homeless. But listeners can (if they wish) ignore the story, play air guitar and sing along with the chorus of “hey yeah, don’t you know, we ain’t got no place to go.”

More topical subject matter: “One Last Supper” seems at first to be a straightforward anti-death penalty song. But after the line “they call it retribution, but nobody wins” it dawns that they’re taking on something more. “During George W. Bush’s term [as governor], Texas executed more inmates than the rest of the US did in the 1970s and ’80s combined,” cites McCutcheon, referring to a 60 Minutes news piece. “And then…the Iraq war. ‘One Last Supper’ is about Bush’s disregard for human life. Supposedly pro-life and Christian, he’s [too willing] to pull the trigger.” Heavier stuff than is often found on heavy-rock albums. But again, like most of the tracks on American Minor, it works with or without the lyrics, driven by McCutcheon’s vocal delivery (think pre-lameness Rod Stewart).

Although as Rob puts it, “our songs are more ‘jammy’ and improvised live,” there’s a strong focus on songwriting in the band. And others have begun to take notice. “One of the songs we wrote back in the day [‘Something You Ain’t Got”] was just recorded and released by Cracker on their Greatest Hits Redux album. It’s great for exposure.”

The album closer, “Sleepwalking” kicks off with a languid, molten guitar lead that sounds like some long-lost Neil Young / Crazy Horse track. The album even contains an inadvertent nod to the godfather of grunge. “I didn’t intentionally write a song that shared a title with a Neil Young song [‘Walk On’]. But I was listening to Young’s On The Beach a lot.” McCutcheon speculates, “I guess it crept into my subconscious.” American Minor’s new album does that too.

Between writing and recording (“we’ve written twenty to thirty songs for the followup”), they’re driving from gig to gig in a van. The night I saw them, we had planned to head out after the Truckers’ set for a few beers, but by 2am the guys in American Minor were ready to turn in; “we played last night in State College, PA. Tomorrow, Nashville.” So much for the glamour of the road. “We’re trying to build a fan base, and do it right. Just because we got picked up by a major label doesn’t mean we’re home free. It happened fast for us, but we’re still working. There’s a lot of work to do yet.”