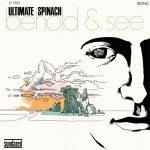 At the time of its 1968 release, Ultimate Spinach‘s Behold & See suffered from critical backlash. Those brickbats were directed primarily at the ill-advised “Bosstown Sound” marketing hype that surrounded the group. Considered on its own, Behold & See is a worthwhile and oft-overlooked artifact of its era. Yet the flow of Behold & See
Read More