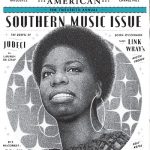 North Carolina has a rich musical history and a thriving current-day music scene. Both are being recognized in the Winter 2018 issue of Oxford American. The esteemed literary and arts magazine devotes the entirety the issue to the state’s music and poetry. And in conjunction with the issue, Oxford American hosted a series of events
Read More
Like the first two nights of Yep Roc 15, the third and final night was loosely organized around a theme. Consistent with the previous nights, the proceedings – again ably and winningly emceed by John Wesley Harding – got underway right on schedule. This night’s theme was Americana, and in light of that, my comments
Read More