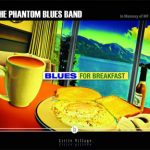 Being associated with Taj Mahal is a guarantor of quality. And the Phantom Blues Band developed their reputation backing the venerated blues/world music giant before setting out on their own with 2006’s Out of the Shadows. Four albums and 16 years later, the six-man outfit still delivers. For all its virtues, even the wide-encompassing blues
Read More