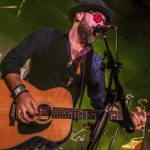 The colorfully-named Moses Jones & the Dirty Southern Soul came together a few years ago with a goal of making its own style of music. The band’s sound recalls the Southern flavor of Lynyrd Skynyrd and the Allman Brothers, with Robert Johnson’s slide guitar at the center of the mix. Johnson had previously released a
Read More