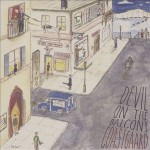 (The following was originally published by the San Diego Reader.) Though Coastgaard build their music on a foundation of surf rock, their approach is quite some distance from that of surf revivalists like Los Straitjackets. There’s an upbeat, playful aesthetic at work on the group’s second album, Devil on the Balcony, one that places them
Read More