They Built This (Ska) City

Originating in 1960s Jamaica, ska is an uptempo dance music that predates reggae. The style’s popularity grew in England, where it became a favorite of the mod subculture. A ska revival took place in England in the 1970s, spearheaded by successful bands including The Specials, The Selecter and Madness. And by the late ‘80s and beyond, third-wave ska (and ska punk) emerged again in the U.K. and spread to the United States.

The exuberant music of ska has never really gone away; listeners and dancers are drawn in by its positive and kinetic appeal. So it’s no surprise that key musicians in the Western North Carolina music scene put together a ska group, Ska City, in 2019. I recently spoke with several members of the band. 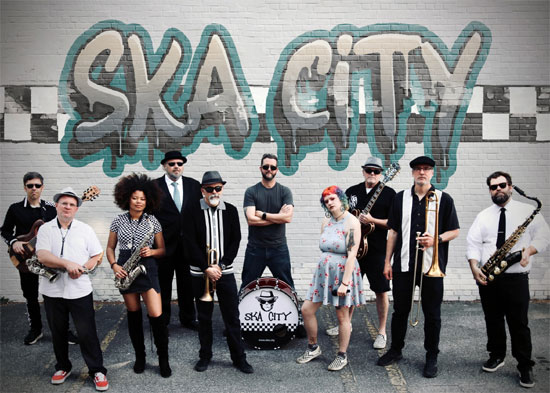 Ska has a long history. Vinnie and Will, you started the band; how did each of you discover and get involved in this music?

Vinnie Sullivan (guitar, vocals): When I lived in New York City, I knew a club DJ who’d go to Jamaica every year and buy up records; he played a lot of ska in his sets. [Early on], my girlfriend (now my wife) and I would go see bands that we knew, and there would be ten people there. But three years later, there were thousands of people in an old abandoned warehouse or dance hall. It really took off, and it was a community.

Will Chatham (drums): As a member of the punk rock scene growing up in Kentucky, I was opened up to ska during the third wave. Around that time, Fishbone, Operation Ivy and other heavily punk-influenced bands started incorporating the ska style into their music.

Your website ska.city describes the group as “a British-American nine-piece collective.” How many group members are from Great Britain?

Rob Grace (keyboards): There are nine of us, and we’re currently one-ninth British: me. But our sax player Dennis [Owenby] does a really terrible cockney accent! So if we ever need to boost the numbers, I think we can fake it.

What has been the most memorable show Ska City has played so far?

Rob Heyer (bass guitar): The French Broad River Festival; it got us to a whole new audience. Festivals are really great, because people who might not go out of their way to see you are already there, so you reach new people that way. And we went over really well.

Does the band play music outside of the ska idiom?

Julia Ruff (vocals): Yes! When I came into the band, I wanted to take some songs that people recognized – songs by Lizzo and Billie Eilish, for example – and turn them into the genre. That way, folks who may not be familiar with ska have a kind of bridge into it.

Do you find that the music you play appeals to a specific kind of audience?

Vinnie Sullivan: No, and that’s one of the things I love about ska. You can have the tattooed mohawk guys in there doing the traditional “skank” dance, and you can have the 65-year-old couple slow dancing.