Keith Allison is one of the great under-recognized figures of the rock and pop era. The singer-songwriter-guitarist was everywhere: a member of the post-Buddy Holly Crickets, opening twice for the Rolling Stones, playing on Boyce and Hart demos, producing sessions for Cher, starring on a daily TV show and more. And that’s only a taste of his mid-’60s work; he’d later star in film and television, carouse with fellow Hollywood Vampires, and record with Harry Nilsson, Ringo Starr and Billy Bob Thornton (to name just a few). He was a close friend of this writer; at the time of his passing last year, we had been working on his memoir. August 26 would have been his 80th birthday. Here are five choice cuts featuring Keith Allison. 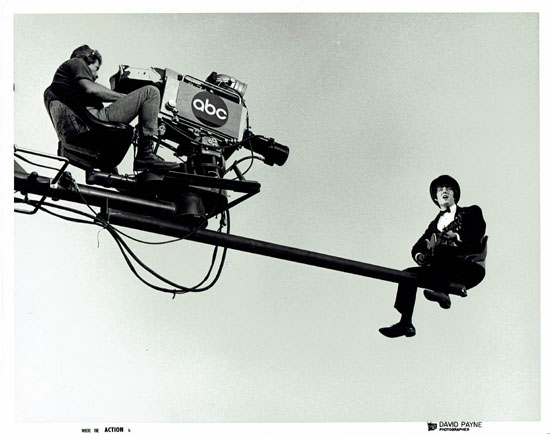 The Eliminators – “Lonely Surf Guitar” (1964) As rock’n’roll took off, all sorts of mini-crazes popped up. Canny studio cats often attempted to jump on the bandwagon. One studio outfit calling itself The Eliminators went not one, but three better: they put together an album of fun – if highly derivative – tunes and with a total lack of subtlety called it Liverpool! Dragsters!! Cycles!! & Surfing!!!! What made this record special is that the anonymous crew behind the music included Glen Campbell, Leon Russell, and guitarist Keith Allison, who wrote this tune.

Paul Revere and the Raiders – “Him or Me: What’s it Gonna Be?” (1967) The Monkees have often come in for brickbats because they didn’t play on all their records. That charge ignores the fact that countless L.A. bands of the era were equally “guilty.” The so-called Wrecking Crew handled much of the instrumental work. Paul Revere and the Raiders always had a busy schedule, so it’s no surprise that producer Terry Melcher sometimes used session players. Allison plays (uncredited) guitar on this gem of a tune as well as many other Raiders songs.

The Beach Boys – “Heroes and Villains” (1967) While the Beach Boys were out playing gigs, Brian Wilson was in the studio laying tracks for masterworks Pet Sounds and SMiLE. When it came time to realize one of his vocal concepts, he roped in old pal Allison, who happened by the studio. Keith was a longtime friend of the band, and had taken part in Beach Boys sessions before: that’s him among the “party” vocalists on the group’s 1965 single “Barbara Ann.”

The Unknowns – “Tighter” (1967) Raiders lead singer Mark Lindsay and his close musical associates had more good ideas than would fit on Raiders albums. So with his Where the Action Is co-stars Steve Alaimo and Keith Allison, he cut a version of this song, a co-write with Terry Melcher. Paul Revere and the Raiders recorded their own version (again with Lindsay on vocals) for their Revolution LP, and yet again on 1970’s Collage. By that time, Allison was a full member of the Raiders.

Boyce and Hart – “Words” (1966) As a hungry musician in Los Angeles, Keith Allison often lent his talents to songwriters’ demo recordings, picking up $10 for each session. One of those was this recording of a song by Tommy Boyce and Bobby Hart, the duo responsible for a string of Monkees classics. The Monkees released their own version on their 1967 LP Pisces, Aquarius, Capricorn & Jones Ltd. Allison played on many actual Monkees recordings, too, including “Circle Sky” and “Auntie’s Municipal Court,” a song he co-wrote with longtime friend and fellow Texan Mike Nesmith.