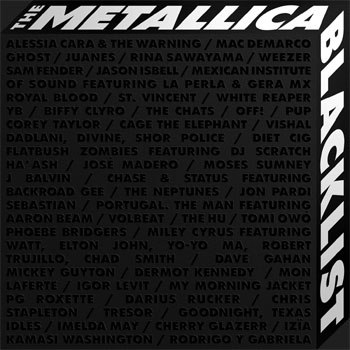 “Metallica creates emotionally intense music, both sonically and lyrically,” Swanson points out. “It’s so intense that it creates a ‘virtual violence,’ one that creates a release valve for despair and violent feelings.” By his estimation, some of society’s pent-up rage can be lessened by experiencing the music of the Bay Area metal band. “They’re trying to channel those emotions into something that’s productive, instead of destructive. So playing those albums is a sheer catharsis between the band and us,” Swanson says. “And it’s very intimate.”

Craig Swanson observes that Metallica’s more sophisticated approach influenced the scene. “They really did open up a niche for other bands to fill,” he says. Many bands that followed in Metallica’s wake would place newfound emphasis upon “highly critical [music and lyrics] that are actually saying something instead of just making noise.”

Giacomo Fiore agrees with many of the points Swanson made in his thesis. A writer and musicologist, Fiore is a lecturer at the University of California Santa Cruz and an adjunct professor at the University of San Francisco. While his own research focuses on experimental music, he teaches about – and listens extensively to – popular music.

“I totally buy the ‘catharsis’ thing,” he says. “If you’re frustrated or down, maybe blasting some ‘87 Hetfield will speak to you.” The connection between music and catharsis is a deep and fundamental one. “There’s a primal scream aspect in terms of letting that sound out,” Fiore says. “We can seek beauty, but sometimes we may want to vent or mourn. And those are all avenues of expression that music allows us to follow.”

Especially in its early prime years (from the start roughly through to The Black Album), Fiore says that Metallica was “great at combining different tendencies in music.” He mentions the band’s skill at drawing from European metal and progressive rock, wedding those influences to the primal energy of punk. Before Metallica, he says, “If you asked your average teenage metal head, they’d say, ‘If it’s metal, it can’t be punk!’” Hetfield and his band mates were key in shifting that paradigm.

Fiore notes Metallica’s ability to hit the sweet spot between aggression and sophistication. The band’s 1999 live album S&M took that to the next level, combining Metallica’s roar with the finesse of The San Francisco Symphony, conducted by Michael Kamen. A return to that successful concept, S&M2, brought the band and the SFS together again in 2019, this time under the baton of Music Director Laureate Michael Tilson Thomas. (An album of that performance was released in 2020.)

As the band celebrates its 40th anniversary, current-day Metallica has dialed back (moved beyond?) some of the speed metal characteristics that defined its early work. (It’s worth noting that James Hetfield was all of 20 years old when the band’s debut was recorded; today he’s 58.) It has been more than five years since the band released a studio album of new material (2016’s Hardwired… to Self Destruct); a new album is said to be in the works. Meanwhile, an eclectic all-star album released in September, The Metallica Blacklist serves to remind listeners of the power and enduring influence of the band’s work.

Commemorating The Black Album’s 30th anniversary, more than 50 artists recorded their own versions of songs from the 1991 album. The participation of artists well outside the sphere of metal – and even rock in general – underscores the degree to which Metallica has made a lasting impression. Jason Isbell and the 400 Unit, Weezer, Diet Cig, Cage the Elephant, Moses Sumney, Phoebe Bridgers, Miley Cyrus, J. Balvin, Darius Rucker and Kamasi Washington are among the artists paying tribute to the band on the 4CD Blacklist. And Washington is among the artists taking part in the “San Francisco Takeover.”

Even today, Craig Swanson still loves those early records, appreciating them from both an academic and gut-level perspective. “The Frankfurt school [of social theory and philosophy] was very critical of cultural institutions, but they would only study ‘high art,’” Swanson explains. “Metallica kicked open the door, and essentially said, ‘Look: this ‘low’ stuff actually matters.’”

But when it gets right down to it, there’s the music. “If you really get into the emotional content of it,” he says, “you’re crying, you’re screaming. It’s just insane.”