Deep Strangeness, With Boundaries: the Odditorium

Third in a five-part series

Seven years ago, an online discussion on the subject of “dangerous dive bars” in Asheville elicited a number of comments. One of the posters on the reddit discussion group r/asheville wrote, “Y’all have missed the Granddaddy of them all: Cowboys Nightlife. Have and know how to use your knife.” Today – after a time when it was known as The Get Down – the building at 1045 Haywood Road in West Asheville is nothing like the honky-tonk bar of old. The Odditorium is something far more unusual: a bar that has hosted everything from drag and freak shows to comedy nights to yard sales to storytelling.

This dive bar is rich with character; it’s also an all-ages music venue and a museum of sorts. Amy Marshall and business partner Tamy Kuper bought the place from Mickey Fox and rechristened it the Odditorium on April Fools Day 2013. “When we took over, we wanted something a little bit different,” says Marshall. They wanted to keep Fox’s focus on helping touring bands, but they sought a different personality for their new bar. 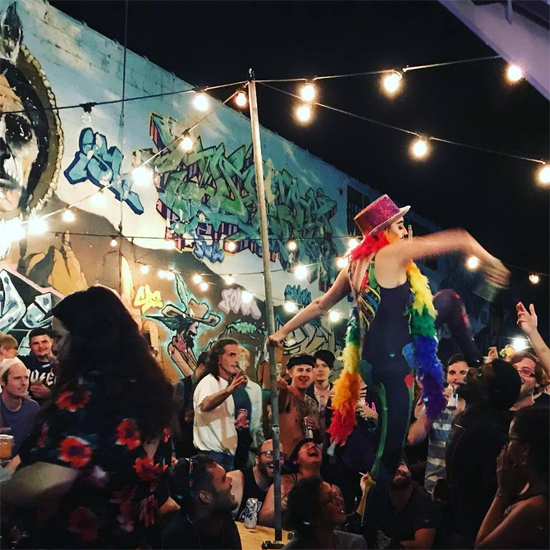 “Tamy and I both are collectors of oddities,” Marshall says. “So we just started out with our private collections, things that we loved and brought in as decor over the years.” Those items tend toward the macabre; creepy vintage dolls in glass cases, circus-themed items, an is-it-real mummified body, a two-headed duckling and other strange taxidermy, bizarre vintage photographs and the like. Marshall and Kuper partnered with Dark and Deviant Oddities, adding additional for-sale items to the cabinets of curiosity in the bar.

Marshall says that early on, she and Kuper received some sage advice from a friend who owns a bar in Fort Lauderdale. “You can’t make your bar anything,” their friend said. “Your bar will become what it’s going to become. And my advice to you is this: let it.” They have done their best to follow that advice. “The patrons, the employees, the community define that,” Marshall says. “It takes on a life of its own, and we don’t fight it.”

“But it’s still a punk and metal bar at its core,” says Marshall. “It’s still a neighborhood dive bar.”

She notes that even though the Odditorium has a reputation for deep weirdness – a recent “kink night” being a handy example – they have established boundaries. “If we like it and it’s weird and unusual or different, or a conversation piece or even a little risqué,” she says, “we’re like, ‘okay, yeah.’”

Even in that context, it’s somewhat surprising when Marshall emphasizes that the bar has a “very strict moral code.” Those words would seem to apply more to West Asheville Baptist Church, across the street and 1000 feet east. But Marshall explains further.

“We will not bring in anyone with a history of violence: against women, against any people. We won’t bring in anyone that makes our patrons feel unsafe,” she says. “We have had to cancel acts that we have booked because we heard from people, ‘That’s not really a show you guys want to host,’” She sums up the Odditorium code as engendering “safety and respect.”

But those admirable boundaries allow for plenty of strangeness. “If it’s gross and it’s a little macabre and it’s pushing the buttons and the boundaries – if it might almost make you want to puke a little bit – we do those too,” Marshall says with the knowing smile of someone who’s seen it all. “We believe in creating conversation and giving people a place to do what they do. And if that’s not a show for you, if that’s going to upset your tummy or if that’s going to make you not feel like you want to be here, then that’s okay. You don’t have to be here that night.”

Marshall admits that there are some shows that even she will pass up. Asking that the specific details of one performance aren’t shared, she says, “There’s a fine line between art and just being gross. And some of our worst of the worst were when that line was blurred.

It’s also – with exceptions made for things like kink night – a place for young people. “We’re a safe place for them,” Marshall says. “We’re one of the only bars left in town that are all-ages. Being a music fan from when I was very, very young, I wanted to go to shows at age 13, 14, 15. I really loved the places that would let us in.

“We have such a great group of underage loyal people in this community,” Marshall says. “And eventually they become 21, and they stay loyal to us. They fall in love with us, and we fall in love with them.” Marshall says that tourist patrons are rare: “Maybe 10 or 15%; not a lot. But some national exposure including a story on RoadsideAmerica.com titled “The Odditorium: Freak Bar” has raised the bar’s profile. The site is “a wonderful outlet for tourists who want to go to oddity locations,” Marshall says.

In addition to live music – the bar hosts a full schedule featuring nationally-touring and local bands – the Odditorium is home to many other events. “Not-music things include comedy – that’s always free – burlesque and drag,” Marshall says. “We do those three every single week. Other than that, we do magic, suspension, freak shows, carnivals and the yard sales. We do ’80s and ’90s proms, we have dyke night. We host [meetings of online Facebook group] Asheville Cat Weirdos.” In a city with more than its share of fascinating entertainment venues, the Odditorium is in a class by itself.

Not long ago, the Odditorium was visited by people from Ripley’s Believe it or Not. “Our hearts grew that day,” Marshall says with visible pride. “Our eyes got all sparkly! They came into our little neighborhood dive bar, and they liked it! There’s nothing more flattering than that. And when they were leaving, they said, ‘Oh, this would be my home away from home if I lived here, and I’m going to send my people.’” And Marshall reports that the visitors did just that.

“If you want to see the true West Asheville community, come to the Odditorium,” she says. “People will come in, peruse the museum and have one of our specials.” Even the specials from the well-stocked full bar are, well, odd. “They get a little takeaway with them,” Marshall says with a mischievous smile. “They might get a bone or a bug or something like that. We even have a cocktail they can drink out of a human skull.”