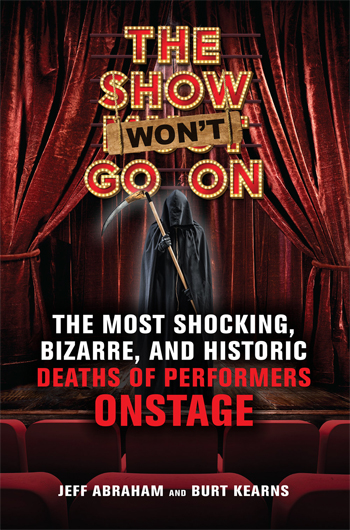 Popular culture has long held a fascination with death. The old “death and taxes” saw about it being one of life’s inevitabilities speaks to the importance we place upon it. And that fixation – mixed with fear and dread – has manifested itself in all forms of artistic expression.

Against that backdrop, a book that explores the real-life intersection of pop culture and death is sure to find a ready audience. And that’s exactly the territory covered by Jeff Abraham’s The Show Won’t Go On: The Most Shocking, Bizarre, and Historic Deaths of Performers Onstage. Rather than concoct horror stories of his own, Abraham (working with coauthor Burt Kearns) digs through news reports and historical archives to bring current-day readers tales of performers meeting their corporeal end in public.

Abraham could have taken a smart-alecky tone with this project. In fact early on, he references the comedian’s popular refrain, “I died out there on that stage tonight.” But he quickly moves from the metaphorical death (failing to entertain the audience) to the very real kind.

Readers may be surprised to learn just how many have reached the end of their lives while onstage, on camera or otherwise in front of an audience. And the author makes it clear that a book such as The Show Won’t Go On cannot hope to be a comprehensive look at the phenomenon: someone’s probably out there dying onstage right now, Abraham seems to suggest. But his book collects the most fascinating stories.

And they are indeed fascinating, if sometimes only in a “can’t look away from a car wreck” kind of way. Some performers deliberately ended their lives in front of people, like Emil Hasda, who shot himself in the head onstage in Poland in 1904, or Ludwig Heinle, who stabbed(!) himself to death onstage in Strasbourg, France in the 1920s. Or take the even more grisly example of newscaster Christie Chubbuck, who killed herself on live TV in Sarasota, Florida in 1974. As Abraham notes, some people are rumored to have kept videotaped copies of that suicide.

Which brings up an interesting question: is it ghoulish, this fascination with public deaths? Perhaps it is. But since death is something that we all have in common, and since popular culture is by definition a shared experience, it makes a kind of sense that the two would intersect. Abraham’s tone throughout The Show Won’t Go On is a deft balance of reportorial prose and vivid storytelling. He’s never disrespectful to the memory of his subjects, and never goes for the cheap laugh. (Though it must be said that some of the anecdotes are funny in their own macabre way.)

Dividing his book into thematically-organized chapters, Abraham recounts the various contexts in which performers have died in public. Some of them seemed to be courting disaster (the “bullet catch” chapter collects these) and others were merely victims of untimely and ironic ends (for example, the talk show host who carped on endlessly about his good health only to expire right after the broadcast ended). Happily for all concerned, and unlike his subjects, Jeff Abraham has managed a successful (and nonlethal) combination of death and entertainment.