Acclaimed fiddler Andrew Finn Magill grew up deeply immersed in Appalachian folk music traditions; his parents were and remain key figures in the annual Swannanoa Gathering. Over the course of his own career, the award-winning musician has explored Celtic and African musical styles as well; his latest project is a modern take on the traditions of Brazilian music. Magill celebrated the release of the album Canta, Violino! with two unique performances at Asheville’s Isis Music Hall in late April.

The innately curious Magill was already familiar with Brazilian musical styles – bossa nova, choro, forró, MPB (Música popular brasileira) and samba – long before his first visit to that country. “But I wasn’t that interested in it,” he admits. “I guess I was busy with all the other genres that I put myself into.” But after meeting and falling in love with a Brazilian woman, Magill relocated to the Southern Hemisphere in 2014. 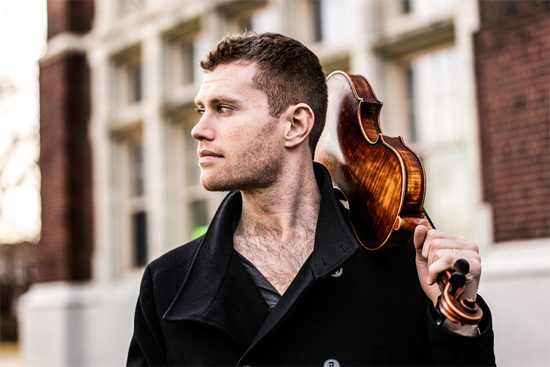 “It was a last-minute decision,” he admits. “I just decided I was going to move to Brazil, leave my day job in New York City and just try living in Brazil and try a new relationship. And then since I was here, I figured, ‘Well, I’m a musician. So I might as well learn some Brazilian music.’”

Magill took a lesson in choro, an upbeat popular folk music that originated in the 19th century. “After that first lesson, I was completely mesmerized,” he says. “I just had to keep learning it. And then I just kept falling further and deeper down the rabbit hole of Brazilian music.”

Building on a foundation of choro, Magill kept exploring the music of Brazil. When he learned about forró – a dance music from the country’s Northeastern region – he sensed a familiar quality. “The music actually reminds me a little bit of Appalachian music in its use of open tuning,” he says. “And it has a very strong, shuffle kind of rhythm.” He points out that other Brazilian musical traditions – samba and choro – are more polyrhthmic.

Magill found that after he started “living, eating and breathing” Brazilian music, it all began to make more sense to him. Meanwhile, he got married. “I always joke that if I had met a Russian woman, we’d be having this conversation about Russian music right now,” he says.

While never abandoning his Appalachian and Celtic musical roots, Magill further pursued his new interest by putting together a band, O Finno. After many live performances in Brazil, he decided to display the fruits of his exploration on an album. Working with four Brazilian musicians (plus American mandolin virtuoso Mike Marshall on one track) he recorded Canta, Violino!, officially released April 6 on Ropeadope Records.

In March, Magill assembled the Brazilian musicians for a premiere in Rio de Janeiro. Staged at the city’s culturally important Casa do Choro, the performance was “a celebration of the project, and of the people who have been a part of my story in Brazil, both musical and otherwise,” he says. The concert felt like a homecoming and a reunion.

Casa Do Choro also sponsors a music camp that Magill attended shortly after moving to Brazil. “It’s not so different than the Swannanoa Gathering which my dad runs,” he says.

But the Brazil performance was merely the first of three concerts celebrating Magill’s newfound musical love. The other two took place much closer to where he began. The April 27 show was an intimate guitar and violin set in Isis’ upstairs lounge. Because he had already arranged for New York-based Brazilian guitarist Cesar Garabini to join him for the Saturday show, Magill decided to do something different with him one night earlier. “We’re going to play a set of entirely Brazilian choros, sambas and bossa novas,” he said ahead of the performance. “We’re going to share this music with the United States.”

The Saturday show was more upbeat, featuring a full band. “It’s going to be much more of a party atmosphere,” Magill said. The concert will focus on material from the new Canta, Violino! “What motivates me most is other musicians,” Magill says. “Watching and listening to their creativity has really inspired me to be more ambitious in my own compositions.”