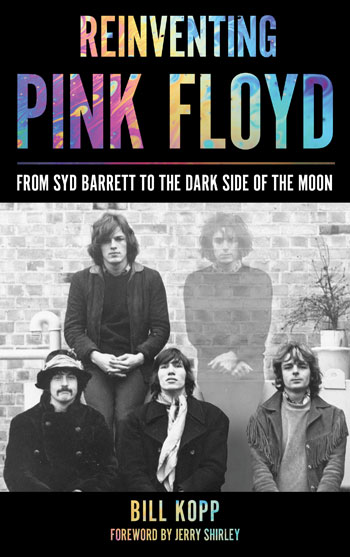 Today is the official publishing date of my first book.

I’m incredibly pleased. This day has been a long time coming. I’ve known since I was a pre-teen that I wanted to be a music journalist when I “grew up.” I’ve been writing professionally for quite a long time now, and I’ve been a full-time writer (that is, making writing my sole source of income) for more than two years. But having a book published still seems like a landmark for me.

The book is called Reinventing Pink Floyd: From Syd Barrett to The Dark Side of the Moon. My elevator speech describing it goes something like this:

When Syd Barrett left Pink Floyd in early 1968, there was every reason to think the band was finished. Yet a mere five years later, they wold release The Dark Side of the Moon, one of the most enduringly popular albums in the history of recorded media. Reinventing Pink Floyd explores the creative journey the band traveled in those five years.

I conducted many interviews with people cose to the band, and in the process discovered a few heretofore unknown bits of information. I also gained new insight and a deeper appreciation for the group’s works. My wonderful partner Audrey did a massive amount of research for the book, and Reinveitng Pink Floyd is all the better for it.

I’ve already done quite a few interviews (appearing variously in print, online and in audio form) and have four bookstore readings scheduled in the coming weeks. All of this is completely new to me, but I am digging it.

Anyone who enjoys my writing is likely to appreciate Reinventing Pink Floyd. Casual fans of the band’s music will find a lot to like, and they’ll likely be moved to explore the early transitional period of Pink Floyd’s music.

It’s my sincere hope that this is only the beginning of a long succession of books I’ll write. I have many ideas, and am already at work developing some of those into book proposals. Someone asked me if my next book “will be about music.” Well, yeah. Other than cocktails, that’s pretty much what I know. Stay tuned.

Reinventing Pink Floyd is available on Amazon, Barnes and Noble’s site, directly from the publisher Rowman & Littlefield, and – if you live in Asheville NC and/or want a signed copy – directly from me. More information is available at reinventingpinkfloyd.com.