Home  »  interview   »   Allison Moorer and Shelby Lynne: Not Dark Yet

Allison Moorer and Shelby Lynne: Not Dark Yet

Shelby Lynne has had a long and distinguished career in country and pop. She began her professional recording career in the late 1980s, and experienced her commercial breakthrough with the 1998 album I Am Shelby Lynne. Over the course of more than a dozen albums, the singer-guitarist has solidified her stature as a mature songwriter with a gift that transcends musical genre.

Three years younger, sister Allison Moorer began her own musical career a few years after Shelby. Maintaining a distinct and separate style, Moorer makes music that leaned a bit more toward Americana and roots styles, but the sisters’ shared experiences and influences meant that there would always be some surface similarities between their music.

Save for occasional live guest spots and a 2003 duet on Moorer’s live album Show, the sisters have largely kept their careers separate. But in 2017 Shelby Lynne and Allison Moorer have decided to collaborate on a recording project for the first time; the result is Not Dark Yet, released August 18. “Everything is about timing,” Shelby says. 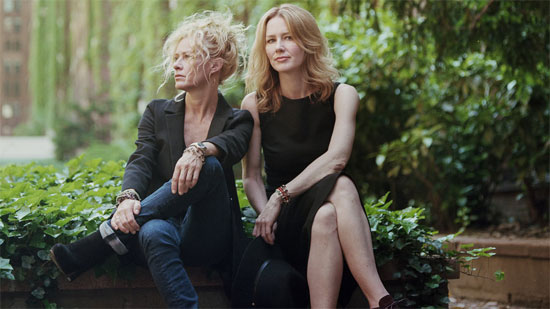 “We’ve always wanted to do this,” says Allison. “We grew up singing together; the first thing either of us really ever did musically was sing together.” She says that with the demands of their separate careers, it was never the right time to collaborate. “It wasn’t something we were avoiding,” she says. “We just had to be given the proper space.”

Allison says that the Not Dark Yet project developed organically. “We had a sense of how it would go,” she says, noting that songs like Merle Haggard’s ‘Silver Wings,’ Emmylou Harris’ ‘Every Time You Leave’ and Jessi Colter’s ‘Looking for Blue Eyes’ were tunes they had sung together as kids. And the decision of which sister would take the lead on a tune was driven by answering a simple question: “Who sang lead on it when we first did it years ago?”

But because the sisters’ voices are quite similar in texture and timbre, naturally complementing each other, Allison and Shelby could easily switch places on a song, should they want to. “Whatever verse each one of us wound up with could easily be switched,” Shelby says. “Because we dip into the lyric, we can switch roles at any time: ‘I’ll fix the coffee; you sing this one.’”

And as far as the arrangements for the songs, those developed naturally too. Allison has a simple description of the responsibility she feels to songs like Haggard’s “Silver Wings.” “To do it like he would like it,” she says. Shelby agrees: “That’s right. Straight-ahead service of the song.”

From their earliest days, Shelby and Allison were immersed in music. Their seamless harmonies are the product not only of the familial bond, but of shared experience. “It’s effortless,” Allison says. Referring to Shelby as “Sissy” (Shelby does the same for her), she notes, “Sissy and I have been singing harmony with the wind since we could sing.”

The sisters’ family placed a high value upon music. “Our mother’s mother was one of 14 children,” Shelby says. “They grew up literally picking cotton during the Depression. They had nothing but music; that’s how they entertained themselves.” And when their grandmother’s home burned to the ground many years ago, Shelby says, “What did they grab? The guitar!”

“Music was always there,” Shelby says. “It was how our family communicated with each other. So we grew up literally hanging out around their ankles, hearing harmonies.” And they heard plenty of pop music. “Our daddy was obsessed with music and brought home records all the time,” Shelby says. “And mama had old Bee Gees records.”

“I learned how to sing from my sister,” Allison says. “One of the reasons that we’re so incredibly close – and, I think, so similar – is that in very many ways, we raised each other. We have music running through us; it’s in our family, it’s in our blood, it’s in our genetic makeup. But when it comes to really learning the subtleties of it, I learned about that stuff from her; and it comes from singing with her. You know, when you’re a harmony singer, that’s your job.”

The songs on Not Dark Yet have great resonance for the sisters. “We had a lot of ideas in the beginning,” Shelby says. “But we wanted to bring it down to the ten most powerful stories to tell in this chapter of our lives.” She says that the primary goal was to pick songs with great lyrics. Allison says that she and her sister wanted an album with “the proper amount of gravity, mixed with just enough lightness to make a real record that reflects what we like.”

Allison continues. “We wanted to find songs that we could read together, to tell a story about where we’ve been, where we are and where we think we’re going.” Not Dark Yet is a musical snapshot of where Allison and Shelby are at this particular moment in time. “As all records are,” Allison says. “If we had cut it six weeks before or six weeks later, it would have been different.”

The album is an eclectic assortment of songs by Bob Dylan (the title track), Townes Van Zandt, the Killers, Nick Cave and the Bad Seeds, the Louvin Brothers and others. But perhaps the most unlikely song on Not Dark Yet is a reading of Nirvana’s “Lithium.” Shelby is up-front about her primary motivation for choosing the song: “The number one reason I chose it is because you’re talking about it right now,” she says with a knowing chuckle. “I have always been a fan of Kurt Cobain; his melodies are killer, and on top of that there are these great lyrics. Some deep, deep stuff.”

And Not Dark Yet‘s sole original song, “Is it Too Much” fits seamlessly into the collection alongside the readings of other songwriters’ work. “We thought that was the perfect piece to put at the end,” Allison says. “Because it closes this chapter, but it also opens the next one.”

The sisters chose Teddy Thompson as the producer for Not Dark Yet. Son of famed British musicians Richard and Linda Thompson, Teddy has an acclaimed recording career of his own. “Teddy and I had the same manager for a time,” Allison says. “Shelby and I had both been big fans of his.” Because he had produced another family project – 2014’s Family, featuring him, his parents and other relatives – Allison and Shelby thought he’d be right for their project. “We felt like he would be sensitive to the dynamics of family making art together,” Allison says. “It can be really intense, because you’re dragging all this history in with you.”

The busy schedules of both women meant that the sessions for Not Dark Yet had to be sandwiched between other commitments. The entire album was recorded over the course of two sessions. “We did a block of songs each time, and tried to make really fair use of our timing,” Allison says.

Though the collaboration was a long time coming, Shelby and Allison have always encouraged each other in their respective careers. Allison says that as she began her career, she was never intimidated by her older sister’s success, and she didn’t worry about being in Shelby’s shadow. “I can’t really be concerned about that,” she says, “because, what am I going to do about it?”

Shelby says that she didn’t really have to offer much in the way of advice to Allison when she first got started in music. “I always knew she was the finest singer who has ever walked the planet, so she got my 100% support from the very beginning,” she says. “We’ve always supported each other no matter what we were doing.”

Allison points out that she wasn’t without some experience, even at the beginning. “I started out singing background for Sissy on the road when I was 17,” she says, “So I had a real good sense of the music business even before I made my first record.”

“She had a better sense of it than I did!” says Shelby.

The sisters are mounting a tour in support of Not Dark Yet. At press time, ten dates had been announced, including a September 2 show at Atlanta’s City Winery. All of the concerts are scheduled in similarly intimate venues. “We’re keeping it really scaled-down,” says Shelby. “Just the two of us and a friend of ours, Joe McMahon, on guitars.” The goal of the shows is to focus on the singing, she says. While the Nashville and New York dates might feature some special guests, for the most part Shelby says that the performances will showcase her and Allison “pumping it like singers and guitar pickers.”

There’s a high likelihood of additional dates being added to the tour as well. “If somebody wants to hear us,” Shelby says, “we’ll be there to do it.”