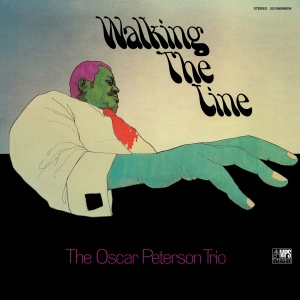 Peterson is absolutely on fire from the very start, with a reading of Cole Porter‘s “I Love You.” There’s a sense of subconscious connection among the three musicians as they charge through eight tunes, most taken from the pages of the Great American Songbook.

The pianist shows that – had he wanted to – he could have been a soul-jazz giant by showcasing the record’s sole original composition, “Rock of Ages.” Playing a mile-a-minute, Peterson never misses a beat on the ivories. It’s a five-and-a-half minute thrill ride that will leave the listener wanting more.

But the trio shifts gears for “Once Upon a Summertime,” wherein Mraz shares the spotlight with Peterson. The kinetic “Just Friends” is the briefest track on Walking the Line, but in terms of notes played, it’s among the fullest. Price’s drums propel the tune along at a high rate of speed.

The high energy performance continues on Side Two with “Teach Me Tonight,” a bluesy, swinging number. “The Windmills of Your Mind” is built upon a challenging percussion foundation courtesy of Price. Peterson and Mraz glide effortlessly across that tricky foundation, turning in engaging performances.

“I Didn’t Know What Time It Was” finds Peterson simultaneously intricate and understated; his band mates even more so. The number would serve as a fine set closer. But instead that honor goes to a reading of Cole Porter’s “All of Me,” delivered in style.

The Oscar Peterson Trio recorded and released several albums in the very early 1970s; all are recommended. There have been many reissues of Walking the Line since its original release, but the 2016 gatefold-sleeved vinyl reissue from MPS will be hard to beat.