A few months ago, I conducted separate interviews with Rick Wakeman and Jon Anderson. Both conversations centered around the then-upcoming (and now current) ARW tour, featuring three ex-Yes musicians: Jon Anderson, Trevor Rabin, and Rick Wakeman. I wrote several printed features based on those interviews; in addition to those, I’ve published the transcripts of my Rick Wakeman chat, split into specific topics. My conversation with Jon Anderson had two parts: one covering his recent collaborative album with Reine Stolt, and the other focusing on ARW. Here’s the latter part. Note that the conversation took place well before the tour began. – BK

Bill Kopp: Tell me about the events leading up to you getting together with Rick Wakeman and Trevor Rabin.

Jon Anderson: Basically, I toured with Rick a couple of a years ago on the East Coast and then I did an English tour with him six months. We did an album called The Living Tree, together, like a duo. And we also spoke about Trevor. Trevor has been working on film scores for the last 15 years and I just happened to go and see him working a couple of times last year, the year before. So I was in touch with Trevor just as a friend and I was like … I was digging what he was doing, so I was enjoying his creative juices flowing. We always talked about, “Well, one day it would be really cool if we get together.”

And then December last year Rick’s manager – whom I have known for years – got in touch and said “Why don’t you guys get together?” And so six months later we’re now going to start rehearsing next month. And we’ll be doing a show by October, November, then we’ll go to Europe and the Far East. So we’re already planning on performing a tour. It’s going to be exciting on many levels.

BK: There’s a lot of overlap in your respective catalogs and clearly anyone of you can and many, many, many times has filled an evening with just the music of one of you and even then, barely even scratched the surface of that. So how are you selecting the music for this tour?

JA: Again, it is just a question of writing ideas down. I wrote them down last week and sent them to Rick and Trevor. They both liked the ideas but it’s always just a basic sketch of songs I’d like to sing. I’d like to hear Trevor do one of his pieces of music from a movie, and I’d like to hear Rick do some of the new compositions and we’re actually working on one at the moment. So, it’s one of those things until we start rehearsing we won’t really know. 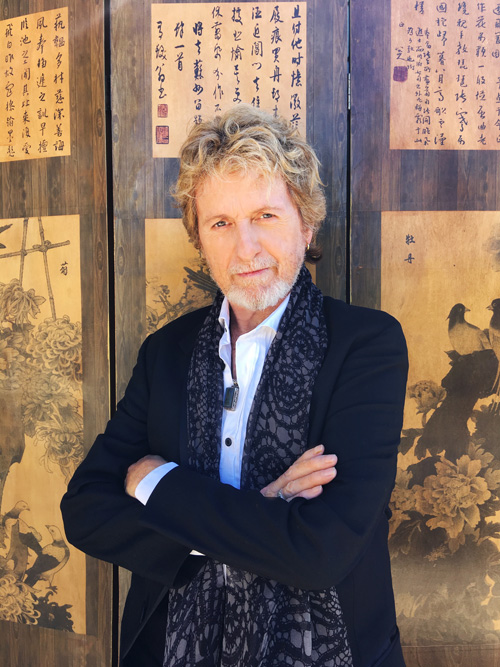 We’re going to be doing some great Yes classics, of course. That’s part of who we are; we’re not doing anything than retaining our musical history and putting it out there as show, a tour. We’re not really thinking of releasing any music because music is, these days … I’m thinking people are not going to release albums soon. I think they’re just going to to make music and tour with new music and that is going to be the new form of projecting your work through the internet, through iTunes.

BK: In January you mentioned on Facebook that the three of you having been doing some writing together, some new material. Can you tell me anything about that?

JA: I’ve got all the lyrics in front of me. I’ve got about five or six songs here. We’ll use maybe two or three of them this time ‘round. Very, very powerful rock … not quite rock … it’s kind of rock … it’s hard to explain what kind of music it is!

Trevor’s been writing this really powerful stuff, musically speaking. And at the same time some very surreal and very sad music about certain events that happened around us that we’re going through. A lot of emotion was involved in writing these.

BK: When I spoke to Rick earlier this week, and he had mentioned the idea for some of the Yes classics that you might perform that you might actually approach them a little bit differently musically: different arrangements. Obviously not hundreds of miles away from the originals, but not just reproducing them exactly the way that people are used to hearing them.

JA: It doesn’t seem logical to carbon copy the songs anymore, because musically it’s forty years later, fifty years later in some cases. So you want to change sounds, the arrangement slightly. People love the songs.

I just did a tour with Jean-Luc Ponty and I was getting standing ovations to “Long Distance Runaround” and it was like an Indian raga. And the audience went bananas; they loved it. So the song always comes through in the end, no matter how you musically sort of surround it. I realized from that tour that if you are working with really wonderful musicians, and you put over a song in its 21 century version of Yes, if you like, it won’t be that different … but it will sound different and it will feel emotionally the same.

BK: For me, one of the qualities of a really, really good song is that it is malleable: you can do different things with it.

JA: I agree. I agree. I mean, happily. Some bands are just performing what they did forty years ago and I’m thinking, “Well, that’s ok, but it’s not what I want to do.” It’s just not the way I think musically, like, I’m always into the adventure of music. But whichever way, I’ll always put on the best show I can.

BK: I think that quality is something that fans of your work appreciate. They’re not the sort of fans that want to hear the same thing, the same way, over and over again.

BK: Both you and Rick, at very times in recent years, have faced some health problems. This upcoming tour is pretty ambitious. I’m sure that the nature of touring for you is certainly different than it would have been in the 70s. Do you look forward to the rigors and demands of touring?

JA: It’s like anything, life is what it is. It’s how you approach it. It’s exhausting but it’s something that you set yourselves up to do. It’s one of those things: you do it and you make it work.

BK: And clearly no one is making you do this, so it’s something that you want to do …

JA: Life is a challenge. I don’t want to stop doing challenges and I’ll be 103 and I’ll stop then.

BK: I am very much looking forward to seeing one of the tour dates. I’ll see you when you are in Durham, North Carolina. I haven’t seen you since the 90125 tour; it’s been a long time.

JA: You’ll have a great time. We’re going to do songs from 90125, Talk and some classic Yes stuff and we’re going to mingle with some new song ideas. It’ll be quite a beautiful event for me. I think everyone will enjoy it.