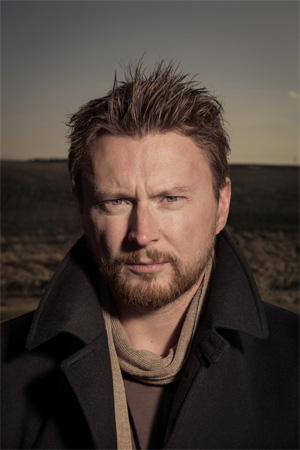 The ambient electronic music of Rhys Fulber‘s Conjure One is a far cry from the music he made in his industrial group Front Line Assembly. And it’s also not very much like his trance/dance project Delerium. While most all of the producer/composer/musician’s work is built upon electronics, the lush soundscapes of Conjure One are decidedly more accessible than Fulber’s earlier work, and are more suited for active listening than as the soundtrack to a rave.

The music of Conjure One – found on 2015’s Holoscenic and three previous albums – is warm and melodic, and the songs alternate between alluring instrumental pieces and evocative tunes featuring ethereal vocals from guests including Sinéad O’Connor and Poe. Fulber got his start with synthesizers when he was a teenager, and as long been drawn to electronic instruments. “When post-punk started coming out, I found myself interested in electronic music,” he says. “I liked the sound of it. And when I first got my synthesizer, I was into bands like Orchestral Manoeuvres in the Dark, with all the chords and the pads, and the somber tone to a lot of it. I feel that is still in my music.”

When not writing, recording or performing as Conjure One, Rhys Fulber spends much of his time in his studio, producing other artists. “I guess you could call that my day job,” he says. “If it’s your profession, you like to stay busy.” Taken as a whole, his body of work suggests an artist who’s driven to create. “Even outside of the professional aspect, yes, I always have to be doing something creative,” he admits. “I don’t feel right without it.”

Fulber is also interested in more challenging musical excursions, but for now he keeps those largely separate from the song-based approach of Conjure One. “I’ve started to do completely live synthesizer improvisations with modular synths, but I can’t really do that in the context” of Conjure One, he says. “Because people want to hear the songs. They don’t want to see some free-form improvisation; they want to hear the tunes.

“I’m not playing with a lot of real instruments now, simply because I just don’t have the resources,” Fulber says. “It costs a fortune. I try to make it as live as I can within its context; I have an electronic setup and a vocalist.”

With regard to others in electronica, Fulber believes that “a lot of electronic artists – especially with EDM – aren’t really doing that much [onstage]. Most guys don’t even have a keyboard or anything! They’re just turning filters, basically.” Fulber thinks that approach is boring for the audience, and for the performer. “I like to satisfy myself, as well. I want to be up there doing something I feel good about. I don’t want to be up there just looking at a laptop.”

Fulber appreciates the necessity of bringing a computer onstage, but sometimes wishes he could find a way to deliver his multi-layered music live without one. “I have a laptop, but I try not to touch it. I have all the other equipment to keep me occupied,” he says. “I’ve seen too many shows where the guy’s staring at a computer, and it just seems like a drag to me.”

“I wish I didn’t have to use one at all,” he says, “but it would be such a hassle to not have one and recreate the songs with a reasonable degree of accuracy. For now, I’ve got to do the best I can to make it not be a focal point. I have keyboards, effects, and lots of other things going on.”

Fulber says that for Conjure One shows, a laptop computer “is more like a rackmount device. But,” he laughs,” I hate it.”

The current run of Conjure One shows is limited to seven dates, all in the western US and Fulber’s hometown of Vancouver, British Columbia. Initially he scheduled a single performance in Colorado. “And then I decided I wanted to do more than one,” he says. “I’m always up for shows.” He admits that his reputation for the harder-edged sounds of his earlier projects sometimes confuses people. “It’s always a bit of a situation to reach the people who do like it, because they’re such a varied audience. It’s not one particular crowd.” He describes those who enjoy Conjure One as “people who stumble upon something by accident, or who like this or that thing. The challenge is bringing it all together.”