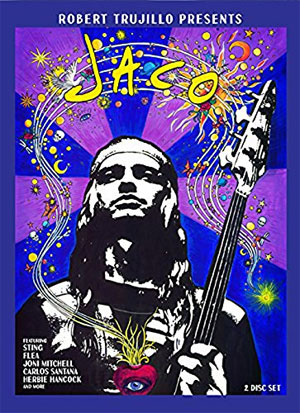 I’m not sure that the casual music fan even knows who the hell Jaco Pastorius was. Certainly among musicians, his is a name that’s revered: even if you’re not into jazz per se, if you’re a player, you know that Jaco was something special, the sort of person who comes along once in a lifetime – if that often – and redefines an instrument.

If you do know him, it’s likely that this is true: even if you don’t much care for the kind of music he made, you respect his artistry. It’s pretty clear from what we know that he was, shall we say, difficult. But his recorded legacy is undeniable.

A new documentary film traces his life. Jaco, produced by Metallica(!) bassist Robert Trujillo, is a meditative look at the life and career of the acclaimed bassist. Part family home movies, part on-screen commentary from those who knew him (Wayne Shorter, Joni Mitchell), part commentary from those who revered him (Flea, Bootsy Collins, but thankfully no Bono nor Dave Grohl), and part atmospheric, mostly silent footage of things like softly swaying palm fronds and oceanic waves, Jaco is a contemplative, decidedly melancholy and somber take on the life of Pastorius.

And honesty wouldn’t have it any other way. His life was tragically cut short – accounts differ on the details – but his was a life that (as least as chronicled in the film) was never meant to last long. The film is a love letter to his memory, but it doesn’t shy away from the difficulties he experienced, and those he exerted upon others. Eventually, those watching the documentary learn that he suffered from a bipolar disorder, and it’s strongly suggested that near the end – by which time he was homeless, living in a park – that he had something of a death wish. But Jaco does a fine job of presenting his story without resorting to hagiography, or sinking to the level of scandal-mongering.

“All of us stand on Jaco’s shoulders,” says Sting. “You needed Jaco to get to this point.” Trujillo – who saw him live onstage four times – says “Jaco was punk rock.” “Whatever the genre can take, the genre can take. Stretch it; pull it,” says Geddy Lee. Put simply, those in a position to know, know that Jaco Pastorius was one of the greats. And this film does an admirable job of reminding us of that.

“Is there anything close to him on the bass?” asks Flea. He answers his own question. “Not to me, man.”

Many bass players – and they’ll admit this – are little more than frustrated guitarists. The bass guitar is a wholly different instrument, and the best bassists understand this. Pastorius was a bass player, pure and simple. Yet he set out to redefine the range of the bass, and he succeeded. There’s something deeply lyrical about Jaco’s playing, much of it not fully understood or appreciated at the time of its making.

Made with the cooperation of the surviving members of Jaco’s family, the DVD of Jaco features a second disc full of long-form interviews with Mitchell, Carlos Santana and many others. The main film includes copious live clips that show Jaco playing with Weather Report, Joni Mitchell, and various bands.

You won’t come away from viewing Jaco feeling that your life has been reaffirmed. His is a tale of loss, of potential unrealized. But Jaco remains a film well worth seeing.