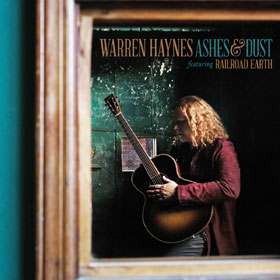 A true son of the South, guitarist Warren Haynes has built a varied career imbued with musical values that proudly display his Appalachian roots. And though he’s strongly associated with the electric guitar – largely through his work with Gov’t Mule and The Allman Brothers Band – his interests have always extended well beyond the relatively narrow idioms of blues and rock. Even a decade ago he was featuring an acoustic guitar reading of Radiohead‘s “Lucky” in his solo live sets.

So it’s not at all without precedent for Haynes to release an album that digs deeper into his affinity with the more acoustic-flavored and rootsy parts of his own musical makeup. On Ashes & Dust (released today), Haynes enlists the musical support of newgrassers Railroad Earth, a group renowned for their own skill at folding in influences from a wide variety of American musical styles (which, come to think of it, is as good a definition as any for the slippery genre known as Americana).

While a significant portion of the disc features quiet, relatively simple arrangements, Haynes makes intelligent use of Railroad Earth’s instrumental prowess (not to mention his own chops). The yearning fiddle work of Tim Carbone helps connect musical dots with some of the 1970s’ best singer/songwriters (Jackson Browne, Neil Young). The prominence of mandolin and banjo on Ashes & Dust gives the music a decidedly Americana air, but Haynes isn’t afraid to apply mostly acoustic tools to decidedly rocking-out goals. The eight-minutes-plus “Spots of Time” executes a slow burn that rocks, while still showcasing Haynes’ Latin-flavored acoustic and electric guitar licks.

From its title, it’s clear that “Company Man” – one of two tracks that have been premiered ahead of the album’s release – is a story song. A tune written years ago by Haynes, it explores the decisions the songwriter’s father had to make when facing a company shutdown. It’s a story familiar to anyone who’s lived in a small town, and Haynes delivers the lyrics in a heartfelt manner.

Ray Sisk‘s “Glory Road” has been a part of Haynes’ repertoire for more than ten years; with the nuanced backing of Railroad Earth, Haynes renders it in a more thoughtful and evocative manner than he was able to do in a solo setting (for Ashes & Dust, he’s radically transposed it, too).

Haynes doesn’t, however, do anything interesting with Fleetwood Mac‘s “Gold Dust Woman.” Beyond an extended instrumental break, there’s little difference between his reading and the Rumours original. But that track is the only comparatively weak spot on an otherwise solid, varied and engaging album. With a long intro that suggests melodrama leavened by the sound of a band tuning up on stage, “Hallelujah Blvd.” unfolds into a weary, melancholy and contemplative tune.

Ashes & Dust is widely being described as Haynes’ “Americana album.” But attempting to pin the record down to a single genre – however stylistically inclusive that genre might be – does it and Warren Haynes a disservice. The music on Ashes & Dust invites all listeners.

An edited version of this review was previously published in Mountain Xpress.