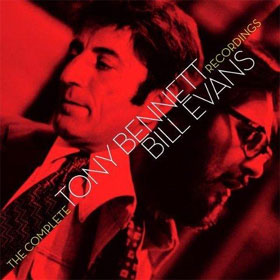 Vocal great Tony Bennett and jazz piano legend Bill Evans both had long, successful and impressive musical careers by the time they decided to collaborate. The pair met in the studio on two separate occasions – the first for three days in June 1975, the second for four days in September of 1976 – and the immediate product of those sessions was a pair of LPs, The Tony Bennett/Bill Evans Album and Together Again. Each was released shortly after its sessions concluded.

Fast forward to 2009. Bennett is 83 years old still very active musically, while Evans has been dead nearly thirty years. Concord Music owns the Fantasy Records catalog, and issues a 2CD box set called The Complete Tony Bennett/Bill Evans Recordings. That set compiles the tracks from both 1970s LPs, and adds twenty alternate takes, plus two songs (the Leslie Bricusse/Anthony Newley composition “Who Can I Turn to (When Nobody Needs Me),” written for the musical The Roar of the Greasepaint – The Smell of the Crowd, and Cole Porter‘s “Dream Dancing”). The set receives near-unanimous acclaim and will remain an in-print part of the Concord catalog offering.

Fast forward again, this time to 2015. Bennett is now 88 years of age, and he’s still at it musically; of late he’s been working with Lady Gaga, giving listeners – those who might otherwise not give her a listen – a chance to discover just how talented the woman born Stefani Germanotta truly is. Meanwhile, Concord takes well-thought-out advantage of the resurgence of interest in vinyl, and releases The Complete Tony Bennett/Bill Evans Recordings as a 4LP set.

The first LP reproduces the contents of the 1975 album. Produced by Evans’ longtime associate Helen Keane, the record features only the two men, in live-in-the-studio performance. There are no overdubs, and no additional instrumentation beyond Evans’ piano and Bennett’s voice. Tunes from the Great American Songbook make up the bulk of the record, and a reading of Evans’ classic “Waltz for Debby” is included. Bennett sings in his trademark strong voice with liberal use of vibrato, and Evans delivers in his trademark style too: rarely does the piano carry the melody. Evans skitters across the keyboard using his block voicings, remaining free of the song’s meter yet somehow within it.

Because there is no discernible “production style” to these sessions – because they’re both simply documents of what was being sung and played, both men in a room together – there is little or no sonic difference between the two sessions. That said, Evans’ piano seems a bit brighter on the first, slightly warmer on the second. The second album (the second LP on this vinyl reissue of Complete Recordings) showcases Evans to a greater degree; “The Bad and the Beautiful” is a solo spot with Bennett on the sidelines. The highlight of this disc is a song closely associated with Tony Bennett, “Make Someone Happy.”

The third and fourth records in the set present additional material from those 1970s sessions. The pair of unreleased tunes mentioned earlier kick off the third disc. The remainder of that and the fourth disc feature outtakes. These are alternate takes of most (but not quite all) of the songs on the original albums. These are noted by their sequence in the recording session (“The Two Lonely People” alternate take 5, for example), which raises an interesting point about semantics. This set is not, strictly speaking, the complete recordings. Instead, we can safely assume, it’s a document of the completed recordings. When the set indicates two alternate takes of “You Don’t Know What Love Is” (takes 16 and 18) we can safely assume that all but one of takes 1-15 and 17 were breakdowns, that is, incomplete takes.

In the end, one wonders how the decision was made to choose the takes that would end up on The Tony Bennett/Bill Evans Album and Together Again. There’s little difference – subtle nuances, really – between the initially released versions and the outtakes. Of course Evans never plays the same way twice, and Bennett’s voice seems to occupy slightly different spaces on various takes. But it’s all pretty wonderful.

Those who bought the CD set won’t find anything new on this 2015 4LP release, other than the restored warmth of analog. But then that’s something, especially on an organic recording that features only a man’s voice and a piano. Those who bought the original vinyl LPs, however, should give serious consideration to this 180-gram vinyl set.