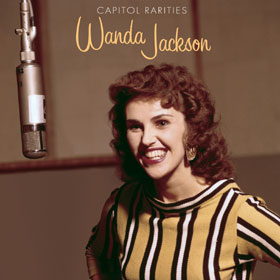 Though her recording career began in the mid 1950s, I only discovered Wanda Jackson sometime around 1993. Sometime that year I was in a Wal-Mart (I rarely if ever set foot in one of those these days, but back then I sometimes did) and found myself poring over a bin or “remaindered” books reduced for quick sale. One title caught my attention: Nick Tosches‘ Unsung Heroes of Rock’n’Roll: The Birth of Rock in the Wild Years Before Elvis. Since it was all of a buck or two, I picked it up.

Turns out it was worth far more than that. Tosches is a provocative and wickedly funny writer. And his vignettes of these early rockers – mostly only three or four pages each – are equal parts irreverence and rich history. Toward the back of the book is an essay on Wanda Jackson titled “Laced by Satan, Unlaced by the Lord.” Tosches discusses Wanda’s early rock-roll sides, most notably “Fujiyama Mama,” a (now) wildly politically-incorrect rocker that equates the singer’s lovin’ skills to the bombs dropped on two Japanese cities near the end of the Second World War.

As Tosches tells the story, Wanda’s rock’n’roll era was short, as her records were too wild for the masses (or at least Capitol Records thought so), so by 1961, as he memorably puts it, “Wanda began recording in Nashville, recrossing her legs and veering again toward tamer country stuff.”

A half-dozen unheard sides (most from that just-post-rock’n’roll era of Wanda’s) have now been collected on a lovely ten-inch vinyl record called Capitol Rarities. While it’s true these are pretty tame when measured by the standards of “Let’s Have a Party” (covered to great effect by Paul McCartney on his standout fin de siècle release Run Devil Run), listened to on their own, they’re pretty good stuff.

Impeccably produced, the six numbers all hew pretty close to standard Nashville arrangement tradition, and remain inside the standard I-IV-V pattern (no doubt allowing the seasoned session cats to get ’em right in a take or two). There’s a timeless quality to these sides, and the up-front mixing of Wanda’s strong vocals puts across the impression that the singer wasn’t getting pushed around in the studio. “To Tell the Truth” lays on the syrupy strings and vocal choir pretty thickly, but it still has an undeniable charm that makes Capitol Rarities a must-hear.

Tosches’ essay (written in the 80s, at which point Wanda had been reduced to cutting devotionally-themed records for Christian labels) ends with a passage that read in part, “the voice that had been too hot to handle twenty years before was heard no more.” In fact Wanda relaunched her career a few years later, leaning more toward the rockabilly material. I had the pleasure of seeing her in an intimate setting a few months ago at the Americana Music Association Conference and Festival in Nashville; she did a short set in the hotel lobby(!) backed by a fiercely tight rockabilly band (think: Smithereens with a doghouse bass), previewing songs from her excellent album Unfinished Business. That Justin Townes Earle-produced record – like the live set I witnessed — presents Jackson in the manner in which she is best heard. An upcoming CD release (also from Omnivore, the label responsible for Capitol Rarities) will collect 29 songs; I’ll be reviewing that album – The Best of the Classic Capitol Singles – soon, and might even post along with it some live (amateur) video I shot of Wanda’s fantastic AMA set.