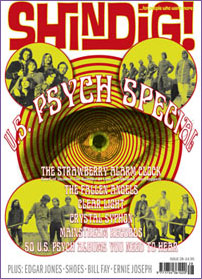 The illustrious (and print-only) London-based Shindig! Magazine ought to be as famous as Mojo and Uncut. It’s not; not yet. As it happens, I write occasionally for Shindig! Several years ago the mag ran a short version of my long piece on legendary no-hit wonders Green Fuz. In 2010 my full-length feature on The Remains (the Boston-based rock/r&b band that toured the USA with the Beatles) ran in the magazine. Also in 2010 I got my first cover story in the mag, a story about Paul Revere and the Raiders. And earlier this year, my second interview with Van Dyke Parks ran in Shindig!

Recently the editors reached out to a number of their favorite contributors, asking for help in compiling a list of what they called “50 U.S. Psych Albums You Need to Hear.” I encourage you to lay your hands on the print issue #28 (full of other great features as well, by the way), because it describes a number of albums you probably haven’t heard (but should.)

My contributions were brief essays on a pair of off-the-wall releases. Here they are. Both of these records are in my vinyl collection. 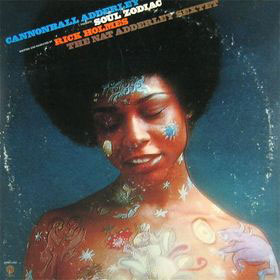 The Nat Adderley Sextet – Cannonball Adderley Presents Soul Zodiac
This curious album – originally a double LP in a gatefold sleeve – came out in 1972, but you could have easily guessed that. When else could a major label (Capitol/EMI) have released such a left-field combination of soul, jazz, funk, screaming rock guitar and spoken word(!) upon an unsuspecting world? Radio DJ/personality Rick Holmes writes and narrates this exploration of the twelve signs of the zodiac, components of what he endearingly (and insistently) calls the “so-lahr sys-tem.” Behind him, the Nat Adderley Sextet – Ernie Watts on sax and flute, bassist Walter Booker, Roy McCurdy on drums, Wrecking Crew mainstay Mike Deasy on lead guitar, George Duke on Fender Rhodes, and Nat on cornet – turns in some genre-expanding music that, in the end, is more accessible (and a helluva lot more fun) than Bitches Brew. Cannonball Adderley (sax on two tracks) and David Axelrod provide top-notch production. 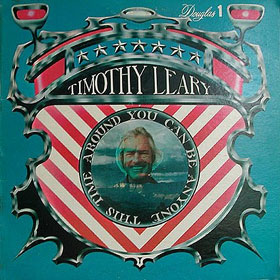 Timothy Leary – You Can Be Anyone This Time Around
“Hey, Jimi, it’s me….Tim. I hear you, Stephen Stills, Buddy Miles and John Sebastian jammed last night. Any chance that you could send me some tape from that session? I’m sure you recorded it. Y’see, I have this rap I wanna do about how cool LSD is, and I need some musical backing for it.” That’s probably how it went when Leary put together this three-track LP. “Live and Let Live” does indeed feature the famous – if slightly noodly and meandering – musical summit (Stills on bass), and the other two tracks are interesting as well. The title track proto-samples liberally from Beatles and Stones records (plus a curious citation of The Grateful Dead that sounds instead like Pink Floyd‘s “Pow R Toc H”), and “What Do You Turn On When You Turn On” features hippie-exploito-film style music, but it’s all in good fun. Right?