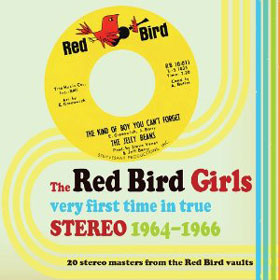 You say you like Phil Spector‘s production? You like those girl-group sounds of the era that were so imbued with the stylistic flourishes of the producer, arrangers and composers that it sometimes seemed not to matter a whole lot who the nominal artist was? Well, I have a treat for you, then. Red Bird Records was home to a string of songs in that style, produced by names you will (or should recognize: Shadow Morton, Jeff Barry, Leiber & Stoller; George Goldner; on and on. The songwriters upon whom Red Bird relied are equally well-known: Tommy Boyce, Bobby Hart, Ellie Greenwich, Chip Taylor, Neil Diamond, again…on and on.

The (nominal) artists themselves on these Red Bird sides – collected on the new Real Gone Music set The Red Bird Girls: Very First time in True Stereo 1964-1966 – are sometimes a bit less well-known, but only a bit: among them are The Jelly Beans, The Ad-Libs, Evie Sands, The Dixie Cups and (on several cuts) Ellie Greenwich herself. The songs will bring a smile to all but the most jaded pop fan; highlights include a previously-unreleased alternate take of “The Boy From New York City,” the original Bessie Banks version of “Go Now” (later a hit for the early lineup of the Moody Blues(, and Evie Sands’ “I Can’t Let Go.”

The thing is, the Spectorian grandeur is actually dialed back a bit on most of these songs; there’s a clarity and directness one doesn’t quite find on the densely-layered production work of Spector (his work on the Plastic Ono Band records excepted). All but five of the twenty cuts on The Red Bird Girls were cut at Mira Sound Studios in NYC, and most of the remaining tracks were recorded at nearby Bell Sound.

The package’s claim of stereo is no empty threat: the brilliant, crystalline sound on these sides might not have been the ideal medium for AM radio of the mid 60s, but it virtually leaps from 21st century speakers. In fact, unlike most music in the style, these twenty tracks benefit from close headphone listening.

Lovingly packaged and appended with a well-informed (and thus highly informative) liner note essay from James Moniz, this is a must-have collection for anyone with an affinity for the Brill Building style of American pop. The Red Bird Girls: Very First time in True Stereo 1964-1966 is stunning, essential, fun and historically important; what more could you ask for?

Postscript: Be sure to follow the liner notes’ advice and stick around after the CD’s last-listed track finishes; lots and lots of fun stuff will reveal itself.