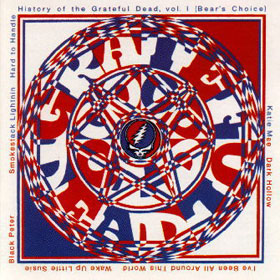 With a title like History of the Grateful Dead, Vol. 1 (Bear’s Choice), newcomers could be forgiven for thinking that this album is a wide-ranging compilation of Grateful Dead tracks. But in fact it’s a document of parts of live Fillmore East performances from February 1970.

Flawlessly recorded, the set kicks off with a Ron “Pigpen” McKernan spotlight acoustic number, the country blues of “Katie Mae.” While the vibe is loose, the performance is tight and note-perfect. Bob Weir sings lead with Jerry Garcia, and the pair turn in a lovely reading of “Dark Hollow,” with uncharacteristically close harmony vocal work. The duo’s gentle acoustic picking and strumming actually beats the passel of early 70s singer/songwriters at their own game. A bit of feedback near the end of the song serves to remind listeners that this is an unadorned live performance.

Garcia takes the lead vocal for the folky “I’ve Been All Around This World,” in which Garcia and Weir succeed ad sounding more like Hot Tuna than anything else. A playful run-through of The Everly Brothers‘ “Wake Up Little Susie” proves once again thaT The Grateful Dead have always been keen students of all sorts of music, appreciating the beauty in a wide variety of styles. “Black Peter” is the album’s only original track, and it highlights the minimalistic approach the Dead often brought to acoustic numbers. It’s quiet and subtle; one can almost imagine the Fillmore audience leaning in to better absorb the song. The only down-side to the track is that it truly requires that attention; as background music – in other words, if you’re doing something else while it plays – it fades away into nothingness.

Side Two of the record (reissued on virgin vinyl in 2012) showcases the electric side of the 1970 Grateful Dead. A cover of “Smokestack Lightnin” is vintage Dead: it stars as a quiet electric-picking number, and builds as the song unfolds. Pigpen’s howling vocals and harmonica are gradually layered atop the circular musical figure, creating a hypnotic effect. Nominally an electric reading, it pretty well bridges the acoustic performances on Side One with the track to follow. Towards the track’s end, the band finally starts to rock (or, detractors, might say, wake up).

The record closes with a fiery reading of Otis Redding‘s “Hard to Handle” that may lead listeners to wonder why The Black Crowes even bothered. The track supports the argument that – not to take anything away from their compositional skills – the Dead were often at their best interpreting the work of others (with the glaring exception of their often-anemic covers of Chuck Berry songs).

The 2012 vinyl reissue doesn’t add bonus tracks, bonus liner notes or anything of the sort: it’s a straight reissue that keeps the focus squarely on the music. And the close-miked performance benefits from the high quality vinyl reissue. An essential document of the Dead at the dawn of the 1970s, History of the Grateful Dead, Vol. 1 (Bear’s Choice) is a welcome addition to my vinyl collection.