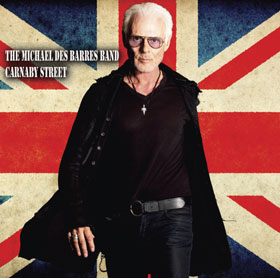 Perhaps best known as the guy who sang Robert Palmer‘s Power Station parts in the touring lineup of that 80s sensation (I refuse to label them a supergroup: Chic and Duran Duran are not Cream and Traffic), Michael Des Barres does in fact have an impressive pedigree. He’s sort of the ultimate insider guy: he’s better known (and more respected) by people inside the music biz, many of whom have jumped at the chance to work with him. He’s an actor who’ll be familiar to any number of American TV shows (mostly in the 80s) and he’s well-known for having the former (Miss) Pamela “I’m With the Band” (Miller) Des Barres as an ex-wife. But hey, he’s got a new album, and it’s a cracker.

On Carnaby Street, Des Barres’ vocal texture is closer to that of Rod Stewart than Palmer. But musically, he’s aiming for a good-time partying rock’n’roll vibe not far removed from what the Rolling Stones sounded like in, say, 1972. The title track, in particular, is a superbly driving affair that should appeal to fans of the Stones, Faces, Free, Mott the Hoople and other highly-regarded British rock acts. And don’t let the album’s title and Union Jack packaging fool you: Carnaby Street is no exercise in nostalgia. Des Barres and his band – band, I say: not anonymous studio hacks – sing and play like they mean it. Despite the sometimes stale and pedestrian connotations of the term, there’s a reason they call it “classic rock,” and Carnaby Street is a modern example of just why that is.