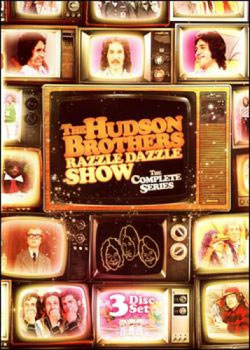 As the Hudson Brothers like to remind us, John Lennon told them he considered them the “kings of Saturday morning.” But they were more than that. Sort of an Osmonds-meets-Badfinger, this band of brothers (Bill, Mark and Brett) put out some terrific music in the 1970s. All of it is long out of print; none of their albums from the 70s has ever been issued on CD, and the lone CD compilation is also long out of print; it changes hands for upwards of $50. Their music was a knowing distillation of the best pop influences (mainly The Beatles), and while they wrote most of their own material, their collaborations made use of some of the era’s finest talents (Bruce Johnston, Bernie Taupin). All are worth tracking down by fans of, say, Badfinger, Pilot, Raspberries, ELO and Sweet.

Despite all of that, The Hudson Brothers were mostly known at the time for their TV show, the Saturday morning Hudson Brothers Razzle Dazzle Show. For one year — September 1973 to August 1974 — they broadcast their weekly half-hour show; the format was essentially a kid-targeted variety show. While the show’s approach was not all that different from other variety shows of the era (such as those hosted by Sonny & Cher, Tony Orlando and Dawn, Captain & Tennille etc.), the show gave viewers an opportunity to see the trio perform many of the songs from their albums (including what DJs used to call “deep album cuts”). While the performances were at least partially mimed, some of the instrumentation and vocals were recorded as they were filmed. Coming as it did in the era before MTV, the show was for most fans the only opportunity to see the group perform. The broadcast era of the show coincided with the peak of the group’s popularity on record (and its artistic zenith: by 1978 they stooped to release a disco LP).

In summer 2008 a DVD set of all the show’s episodes was released. It does show that the program’s variety components haven’t all aged well, but they’re still entertaining. It’s worth reminding one’s self that this stuff — especially the comedy skits — was aimed at kids. Rod Hull and His Emu is amusing, and one can see how kids of the 70s liked the stuff. (Disclaimer: I watched this show when it was on TV. I was 10.) The formulaic and repetitive nature of the show can grate on one’s patience during extended viewing: it’s a bit disconcerting to witness just how much of the show — from the long opening sequences to the between-sketch pieces — is exactly the same every episode.

The bonus material is interesting, too. It includes a sampling of the best sketches from the brothers’ prime-time series; that show ran a month and immediately preceded the Razzle Dazzle show. But the “bonus” also includes even more of the “Chucky Margolis” skits, arguably the most useless waste of audio and video with which the Hudsons would ever be associated (they wasted nearly half an LP on this nonsense, too).

The set would have been even better if there was a music video-only section; the comedy’s fun and all, but wasn’t really designed for repeat viewings. The music video segments are the real gems here.