Home  »  interview   »   Peter Holsapple and Chris Stamey, There and Then

Peter Holsapple and Chris Stamey, There and Then

After a three-decade hiatus, the original lineup of the dB’s will release a new album in June 2012. Watch this blog for an interview with Peter Holsapple and Chris Stamey, coming soon. Meanwhile, from my archives, here’s a feature I did when those two released their delightful hERE aND nOW album. — bk

To music fans of a certain age, Peter Holsapple and Chris Stamey are virtually household names. As members of the now-legendary dB’s, the two offered up a clever, accessible modern take on power pop across several albums. Their rewards, as is often the case in such matters: critical acclaim, lackluster sales. Friends since childhood, Holsapple and Stamey played music together often during the ensuing years. 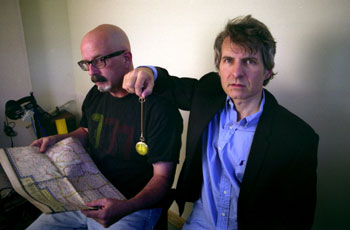 Each stayed busy before, during and after the dBs era: in the late 70s Stamey played with Memphis enfant terrible Alex Chilton, then formed Sneakers with Holsapple and Mitch Easter. After the dB’s went on seeming permanent hiatus, Stamey released a couple of solo albums, then retreated from the spotlight to concentrate on producing at his Chapel Hill studio.

After the dB’s, Holsapple began a career as an in-demand utility man for several groups: he played and toured with REM and Hootie and the Blowfish. He also joined another on-again-off-again outfit, New Orleans-based Continental Drifters with then-future (now-former) wife Susan Cowsill. In the wake of Hurricane Katrina, Holsapple moved to Durham.

Amidst all of these projects, Peter and Chris found time to record and release 1990’s Mavericks. The acoustic-based (yet electric and sometimes rocking) album enjoyed popularity on college radio, but the subsequent demise of the RNA label rendered the disc difficult to locate (it was finally reissued in 2008). A hallmark of Mavericks was the near-seamless blending of voices in two-part harmony, not unlike their heroes the Everly Brothers.

Nineteen years later the duo have reunited for a followup to Mavericks. Released in June 2009, hERE aND nOW builds on the strongest elements of the 1990 album: chiming guitars, clever wordplay and close harmonies. But why such a long wait?

“Eighteen years is a long time; there’s a whole generation of listeners that has come and gone since then,” observes Holsapple. “We’ve never been, sort of, ‘of our time’ anyway. We’ve been making records for years.” And, he laughs that in some ways the new music is “the same stuff we’ve been making since ’72, really. We wait for the cycles to come around.” Stamey adds, “It would have been done a little sooner; we began it right before Katrina. When Peter had to relocate from New Orleans, that really put things on hold for a bit. We really enjoyed playing together, making and touring behind the Mavericks record, but we just didn’t get back to it until now.”

The Everly Brothers influence again comes through clearly on hERE and nOW. “I’m a big fan of the Warner Brothers years,” notes Holsapple. “The [1966] record Two Yanks in England that they did with the Hollies is a really stellar piece of work. And Chris is a big fan of the Cadence Records [‘Wake Up Little Susie’, etc.] era. So once again our strengths meld; we do a little arm wrestling and come out with what we come out with.” Peter observes that “for two guys who aren’t siblings, we really mesh very well. I’m really big on two-part harmonies.” He half-jokes that such an approach makes him “an enemy of today’s hot Nashville country sound, with the automatic third part layered in electronically, or by well-paid session singers. But I’d infinitely rather hear a duet. Two-part harmony leaves something to the imagination.”

The two write separately but collaborate on polishing the songs and developing arrangements. Their approaches to songwriting are a study in contrasts. Stamey waves off the idea of trying to embrace universal themes in his writing. “That kind of careful calculation doesn’t really participate in that (often very brief) creative period. In the fifteen or thirty minutes when you’re writing a song, I don’t think you’re thinking in that way.” Yet Holsapple admits, “There’s a lot of autobiographical stuff that I try to cloak and make as semi-universal as I can. The great desire for any songwriter, I guess, is to make a song that anybody can listen to. Not just pointy-headed intellectuals in the northeast. And that’s all I’m ever trying to do.” Stamey agrees that “We think what we do together as a duo is very approachable; you don’t have to subscribe to an esoteric indie-rock point of view that only admits Jesus Lizard and Arto Lindsay — both of which I love — in order to enjoy it.”

“And If I can make someone laugh once in awhile, I will,” admits Holsapple.

The song “Early in the Morning” includes this line: “Read to me the obituaries / but if we’re not in there then we’ll see…” Holsapple explains: “I read the obituaries while I’m making coffee. Because I’ll certainly make a smaller pot if I’m in there.” He continues, “I love words. I love the New York Times crossword puzzle; it helps keep my brain sharp. And considering all the things I’ve done to my brain over the years, any sharpening that I can manage is a help.”

In fact, Holsapple is well-known for his clever turns of lyrical phrase. “I would be lying if I said it wasn’t intentional. I enjoy wordplay; I have that terrible gift of being able to see anagrams where other people see a block of letters. I’ve always liked great writing: prose, poetry and lyrics. But I’ve never been a big fan of lyric sheets: around the time of Led Zeppelin‘s Houses of the Holy, we were finally able to see what Robert Plant was singing. And it sent a shudder down my spine! Because sometimes wordplay works, and sometimes it doesn’t. That’s the chance you take. But I’d rather take the chance, have a little fun with it, and make it sound presentable and interesting for the listener.”

The lyrics of “Early in the Morning” trade in lump-in-the-throat imagery: “I’m your cheap date / But I remember when I wasn’t.” Holsapple allows that “that song is pretty autobiographical. I used to be the party boy who’d stay out all night long. But I’ve really grown to appreciate my more tempered domesticity.” Then, almost as if on cue, Peter excuses himself briefly to take a call from his daughter.

Returning, Holsapple says that “we just try to make the music that’s the most satisfying to make, and to be able to listen to later. There are some records that you can listen to three times and then you’ve kind of figured out everything that’s gonna happen. On our records, I think you can still listen to some of the stuff from the early days and have little surprises pop out at you.” With so many projects running concurrently, it was still easy to select songs for this project. As Chris explains, “I guess we let the songs talk to us and tell us where they fit.” hERE and nOW features a guest spot from another musician closely associated with New Orleans. Holsapple: “Branford Marsalis lives in Durham. Though I think he moved here at a different time, and under different circumstances. I met Branford through my association with Hootie and the Blowfish. He showed up at some of the golf tournaments we played. He got up and jammed with the band. He knew who I was, funnily enough. I said to him, ‘I’ve got this song about New Orleans, and I’d love for you to play a sax solo on it.’ He said, ‘Let’s work it out.’ So we did. He came over to Chris’s studio and played on that, and played on ‘Early in the Morning.’ It was a big thrill for me. 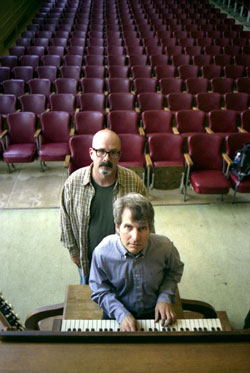 The new album rescues an old song from undeserved obscurity. Peter provides background on Family‘s 1972 song “My Friend the Sun”: “I bet somewhere in your record collection there are albums where you know one side of the record intimately…and the other side, not really. Such is the case with Bandstand. I knew ‘Burlesque’ and ‘Broken Nose’ and all that stuff really well. Loved it. But I never really flipped it over very much. But I put it on one day, and there was ‘My Friend the Sun.’ And it was like, ‘what a beautiful song.’ So I recorded a version of it in New Orleans when I lived down there; I had some friends work on that. And then the master tapes got destroyed in Katrina. And then I started thinking, ‘well, maybe this would be a good song for me and Chris to do.'” Holsapple insists it’s not all that obscure after all: “Apparently if you go on YouTube, you’ll find that it’s a very popular drunken British singalong.” Stamey, too, is a long-time Family fan: “I actually went to see them in Brighton or Bournemouth around 1972, I think.”

The limited tour features an acoustic/electric Stamey/Holsapple duo plus a rhythm section. The set list spans songs from both of the duo’s albums, dB’s tunes, and the odd cover. No stranger to Asheville, Stamey teases that “at the Grey Eagle — which is a really great room — it’s an easier place to do some requests. In fact, we encourage people to leave requests on the dB’s message board.”

Despite having played with so many big names, Holsapple insists he has drawn much inspiration from another type of gig altogether. “I did kids’ shows for a long time in New Orleans. They take no prisoners! That’s a hard audience; you’ve got to be direct; you’ve got to work to get them into it. You’ve got to get them to sing along. And there’s nothing wrong with any of that.” Stamey adds that “We both grew up starting to make music in the late 60s. And the whole idea of ‘winning the lottery’ with music wasn’t really part of it. It was an honorable tradition. We wanted to learn how music worked. Nowadays there’s an idea that if you get just the right Myspace position, and do a video, you can make a ton of money. But the reality of it is: most musicians and most writers don’t become wildly successful. The reason to do it is that you’re drawn to it, because you love it.” Coming back to the kids-as-audience idea, Peter observes, “You can have as highfalutin’ lyrics as you want to have, but I don’t know too many kids that wanna sing along with Leonard Cohen. Believe me: I love Leonard Cohen, but he’s not the guy I’d book for my kid’s birthday party. I’d be more inclined to do that. I’d take that gig.