Home  »  review   »   Album Review: The Squires of the Subterrain – Sandbox

Album Review: The Squires of the Subterrain – Sandbox 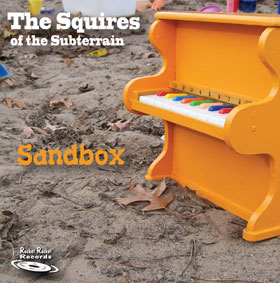 Imagine this: a Beach Boys pastiche that’s also a concept album dealing with ecological devastation. Sandbox is that and more: it’s a one-man-band affair by The Squires of the Subterrain, the nom de rock of Christopher Earl. And on Sandbox, Chris/Squires (heh) doesn’t aim his sonic recreation/re-creation talents solely at the concept-friendly style of SMiLE-era Beach Boys: While there’s a healthy doses of virtual Wrecking Crew here, many of the sounds on this album are those of surf-n-stock-era Beach Boys, right down to the twangy Fender guitar licks and Mike Love-ly nasal vocals.

Clever in-jokes abound, but they never distract form the musical good times. Chuck Berry-by-way-of-Carl Wilson guitar solo style is the order of the day on “Surfin’ Indiana.” The more expansive Pet Sounds vibe does make a brief appearance, but leave it to Earl’s twisted take on the 60s to wed a sensitive melody and arrangement to a song with a bait-and-switch title: “(I Still) Mow Your Lawn.” There’s even something that sounds like a clavioline, or Theremin, or electrotheremin, or… something.

Another little in-joke that bridges the gap between the carefree beach vibe with environmental concerns is tidily summed up in the Phil Spectorian “Endless Winter.” See what I mean? And clever lyrics are couched within the poppy tunes. To wit: “Guitar picks shaped like teardrops that I shed for you.” On “Woodrow Wilson” another sly/oblique title, Earl hops right over the late 60s, aiming his talents at 70s style Beach Boys, complete with Moogy blobs of synth augmenting a piano-based melody. The most rock-oriented track on Sandbox is “Carbon Footprint,” which bears some sonic similarities with the Blondie Chaplin/Rikki Fataar-era BB’s. It too makes deft, effective use of happily-dated synth textures. But it’s also essentially a surf instrumental, rooting its influences back in the 60s.

“Lisa’s Tower” is Beach Boys twice-removed; it’s redolent more of what Klaatu might have sounded like if the hype suggested they were instead Brian Wilson and his brothers and pals reunited. “Happy Farmers” evokes SMiLE‘s Van Dyke Parks Americana lyrical obsessions, and builds a melody around a banjo figure to hammer the point home for anyone who might have missed it.

All sorts of left-field sound effects and treated vocals make “Rising Water” a sort of Beach Boys-meet-”Revolution 9.” But for the album closer, things revert back to the lovely and conventional “For Five Minutes There,” which encapsulates much of what made the Beach Boys wonderful – “Wendy”-styled guitar, creamy vocal harmonies, and straight-ahead percussive punctuation – while still showing off the original talents of The Squires of the Subterrain.