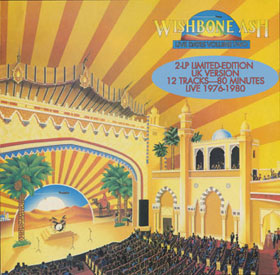 It’s a delight – albeit a rare experience – to stumble across good music that’s been out there for years, but that you somehow never noticed until now. In 2007 I interviewed Yoko Ono in connection with her then-current album Yes, I’m a Witch; the concept behind that album was Yoko’s contacting current artists she liked, and allowing them access to multi-track masters of her work. They were free to do with those as they liked. Her choices were interesting: Flaming Lips, Polyphonic Spree, and Porcupine Tree among others. It was through her – in effect – “recommending” the last of those to me by having them turn in a reworked version of “Death of Samantha” from her 1973 double LP Approximately Infinite Universe — that I discovered Porcupine Tree.

Point is, that was my entry point into the music of Porcupine Tree, followed quickly by their 2007 album Fear of a Blank Planet (I interviewed Steven Wilson around that time as well). But perhaps the greatest joy associated with that discovery was my learning that this band had a back catalog of more than ten studio albums.

The discovery of other previously-unheard-by-me music carries a similar bounty of pleasure for me. So while I had a passing familiarity with Wishbone Ash‘s 1972 album Argus, I hadn’t heard any of their other material. The reason had more to do with the dismissive tone critics used when discussing their music (I’ve been an avid reader of rock critics since a very young age) coupled with the fact that their brand of rock had fallen pretty well out of commercial favor by the end of the 70s.

What all that means is that thought I might have seen Live Dates Volume Two in record stores around the time of its 1980 release, I wasn’t at all likely to pick up a live collection – especially one ominously titled Volume Two – by a group I wasn’t very into.

Fast forward thirty-two years. I received a stack of advance/promo CDs I had requested, and mixed in with them was a CD reissue of that album. I wasn’t sure if I had requested it or not, but decided to give it a cursory listen, if only to eliminate it from consideration for review. To my surprise, an hour later, I was still enjoying the CD.

The standard knock on Wishbone Ash is that they could never decide what sort of band to be: boogie or prog. Were they in the manner of Bad Company, Savoy Brown and so forth, or were they a progressive-leaning band a la Pink Floyd? To my ears, the closest comparison might be to Camel, but with a more pronounced and guitar-centric sound. The trademark two-lead-guitar sound was very much in vogue during the later half of the 1970s; perhaps the most popular exponents of that approach were Thin Lizzy (Gorham/Robertson, then Gorham/Moore) and Boston (mostly an overdubbed Tom Scholz). But Wishbone Ash turned in a credible version of that style, and Live Dates Volume Two is chock-full of guitar work.

The Camel comparison is due to the fact that while Wishbone Ash had a fine vocalist in bassist Martin Turner, much of the material on this live set is centered on long instrumental passages. (Come to think of it, the same is true of much of Pink Floyd’s work, despite the evocative vocals of David Gilmour.)

Live Dates Volume Two benefits from excellent live production quality, though at this late date it’s hard to know if any “sweetening” (a la Wings Over America, Thin Lizzy’s Live and Dangerous or Peter Frampton‘s juggernaut Frampton Comes Alive), though the exceptionally clear bass lines and vocals do raise suspicions.

Focusing almost exclusively on material and live performances from 1973 onward (with but one song from Argus), Live Dates Volume Two is filled with songs that are – as often as not – showcases for guitar solos (um, duets). The musical aesthetic is more late 70s than 1980, and that’s fine. Vocalist/guitarist Laurie Wisefiled had joined (replacing Ted Turner) after Argus, and his addition moved the band’s sound closer to the AOR sounds so popular at the time.

The group’s early boogie style remains, as exemplified by tracks like “Helpless,” which seems based on Little Willie John‘s “Fever” by way of, say, Foghat. In a very Spinal Tap-styled gambit, “F.U.B.B.” (the liner notes explain the title) opens with a bass solo. The ten-minute instrumental tune is also reminiscent of Ted Nugent‘s “Stranglehold,” albeit with more interesting (and nuanced) guitar work than the Motor City Madman could ever turn in. And the closing section of the track features some fiery, turn-on-a-dime guitar dueling. An even longer number, “The Way of the World” will please fans of Blue Öyster Cult with its multi-part arrangement, showy drum fills and – here it is again – fiery guitar dueling.

The original US release of Live Dates Volume Two included six tracks and ran the standard length of an LP of the era (about 38 minutes). The UK version of the time, however, included a second disc with early pressings. The 2012 reissue on Real Gone Music includes all twelve tracks in the original running order, roughly doubling the length of the album. The result could be termed more-of-the-same, but in the case of Live Dates Volume Two, that’s not at all a bad thing. For fans of melodic (but not overly wankifying) riffy guitar rock, this album complements Argus to create a tidy 70s summary/overview of Wishbone Ash’s work.