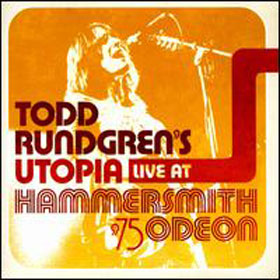 In the early 1970s, Todd Rundgren was rightly known as a pop wunderkind, a sort of rock renaissance man. Breaking free of his mod-influenced 60s band Nazz, he created a trio of pop albums that synthesized the influences of everything from Laura Nyro to Jimi Hendrix, from Carole King to the Beatles and beyond; moreover, he made it sound like nothing so much as himself. And as often as not, he did it by himself on record, with occasional assistance from sidemen. On his first couple of solo albums (Runt and The Ballad of Todd Rundgren) he used the sons of Soupy Sales (Hunt and Tony). By the time of his masterwork Something/Anything?, Rundgren cut three sides of that double LP completely solo.

But as his ambitions grew more involved, he decide to put together a “real” band. His grand vision (one of ’em, anyway) was for a group that embodied his twin interests of progressive rock and psychedelics. Calling this project Utopia, he initially reenlisted Hunt and Tony Sales for a few dates in early 1973. Dissatisfied with the results (a bootleg from C.W. Post University documents a Utopia Mk I concert), Rundgren traded in the Sales brothers rhythm section for a much more prog-leaning and expanded lineup.

By October 1975, Todd Rundgren’s Utopia (as it was still called; the shortened Utopia name wouldn’t come into use until early 1977) had released a pair of of prog-rock albums: that very month, their live album Another Live (recorded at August ’75 concert dates) hit the shelves, and their self-titled debut came out in September of the previous year. On both of those albums, Utopia was a six-piece band. In addition to Rundgren on guitar and vocals, the sextet lineup (known among fans as Utopia Mk II) included Kevin Ellman on drums (replaced by John “Willie” Wilcox by the time of the live set); John Siegler on bass; and no less than three keyboard players: Moogy Klingman, Ralph Schuckett and M. Frog Labat. (Labat was replaced by the far more versatile Roger Powell by the time of Another Live.)

The pair of albums focused on extended works in the manner of progressive bands of that era (Yes, Mahavishnu Orchestra, etc.), with long instrumental passages that allowed each member to display his instrumental prowess. Ensemble playing remained a big part of the Utopia sound, even on pieces like the thirty-minute-plus “The Ikon.”

But Utopia was a constantly-morphing unit. By the time Another Live hit the shelves, the band was — for the first time – a quartet. Klingman and Shuckett were gone, and Roger Powell was now tasked with handling all of the keyboard parts. While Powell was a highly skilled player, he only had two hands: as a result, the arrangements were scaled back, and the set list was tweaked in favor of shorter, more song-based pieces. 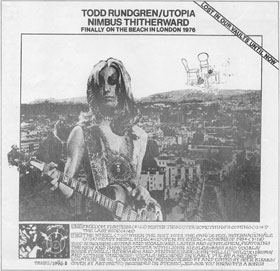 The four-piece Utopia (augmented by two backing vocalists, one of whom was Luther Vandross – yes, really) toured heavily, and on September 10, 1975, they found themselves onstage at London’s Hammersmith Odeon. The show was recorded for the radio program BBC Rock Hour, and has circulated for decades – on bootleg vinyl, then cassette, then CDR – most often under the tongue-twisting title Nimbus Thitherward. Now, nearly forty years after the fact, this show is getting an official release on Shout!Factory.

The set list on Live at Hammersmith Odeon ’75 serves up a mix of tunes from the first Utopia LP (the rousing opener of “Freedom Fighters”), four tracks on the then-current live album (“The Wheel,” Roger Powell’s “Mister Triscuits,” a cover of The Move‘s “Do Ya” that pre-dated the ELO cover by more than a year, and “Heavy Metal Kids” from Rundgren’s fifth solo LP Todd.) The remainder of the set focused on songs from Rundgren’s A Wizard/A True Star, Something/Anything? and more from the Todd double-LP.

As it turns out, while this official release follows the running order as broadcast on the BBC, it does not present the complete show – or actual running order – of the concert itself. An audience recording of the show adds (among others) “Utopia Theme,” several songs from Rundgren’s Initiation LP, his solo hits “Hello It’s Me” and “I Saw the Light,” and – as any onionhead would know and expect – closes with “Just One Victory.”

For the better part of Live at Hammersmith Odeon, the four-piece handles the material expertly; by pruning a bit of the filigree from the proggier tunes, the performances display a musicality not present on the earlier versions. It helps that Vandross is a better backing singer than either of the departed keyboardists, too. The entire set is high-energy and exciting, except when it’s not supposed to be, as on the ballad “The Last Ride.”

The only place in which the band falters is during a cover of Nazz’s “Open My Eyes.” There’s something stiff and mechanical about the performance: Powell’s synthesizer keyboards don’t improve upon the original’s electric piano, and while Wilcox is a fine drummer, his playing here lacks the finesse of Nazz drummer Thom Mooney, especially on the jazzy flourish of the song’s middle-eight. Here, Todd’s “Sons of 1984” lacks the original’s Wollman Rink crowd singalong, but remains an effective, anthemic piece (thanks once again to Vandross’ support).

Packaging for this set is as basic as can be: no liner notes, no recording info, no personnel info (Rundgren introduces the band during the set), and no archival photos. But the sonic clarity of Live at Hammersmith Odeon ’75 is impressive for a live show from its era, and the upgrade from bootleg status is most welcome. Here’s hoping that the album will do well enough in the marketplace to encourage more archival releases from Rundgren’s past. Me, I’d love to see official release of one of his first performances under his own name (with The Hello People supporting), the Sigma Sound radio broadcast from Philadephia In 1971. Fingers crossed…