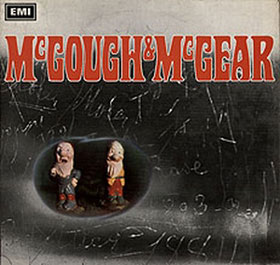 Unless you’re a student of Beatles arcana and ephemera, you’re probably not familiar with an act called McGough & McGear. If you grew up in the England of the late 1960s, you might have known about them. The pair were two-thirds of a musical comedy troupe called The Scaffold. And despite any success he might ever gain on his own, Michael McGear was and will always be known as the brother of one Sir Paul McCartney.

McGough & McGear recorded one album, a self-titled affair originally released in 1968. The album was slated for release on the Beatles’ new label Apple, but that didn’t happen; McGough & McGear came out on EMI/Parlophone (the Beatles’ original UK label). As Richie Unterberger‘s liner notes (included as part of the 2012 reissue of McGough & McGear) explain, the duo didn’t play instruments on this album of music and poetry; Roger McGough composed the lyrics, and McGear wrote the music.

The actual playing of said music, however, was left to some very heavy friends. Uncredited on the original album release (due to typical contractual prohibitions) were Paul McCartney, Jimi Hendrix(!), Graham Nash, Dave Mason, The Pretty Things‘ former drummer Viv Prince, and others. Production duties were handled on a song-by-song basis by Paul and by ex-Yardbird Paul Samwell-Smith. The original LP’s back cover includes the wry credit “Musicians by kind permission of themselves.”

The music on McGough & McGear is very much of its time. “So Much” sounds like a swinging London freakbeat track of 1968, not far removed in sound and feel from releases by Elmer Gantry’s Velvet Opera, Wimple Winch and the sort of acts collected on modern-day compilations like The Great British Psychedelic Trip. But the bulk of the album is comprised of poetry bits with occasional musical accompaniment, making the album a sort of kindred spirit with another hardly-sold-at-all release, The Cheerful Insanity of Giles, Giles & Fripp, recorded by a proto-King Crimson trio at almost exactly the same time (Spring 1968).

Much of “Basement Flat” is a capella singing with bits of tambourine, sleigh bells and pan flute. There’s a vaguely hippy-dippy vibe to many of the tracks, with the sound of crashing ocean waves fading in and out of the mix. But a sense of humor pervades the proceedings, as witnessed on a lengthy track called “From: Frink, A Day in the Life Of.” Part of the lyric includes this phrase: “Married couples made love…often with each other.” Pretty racy for ’68.

Since it was ’68, some usual musical suspects make a welcome appearance: Mellotron flutes – most likely courtesy of McCartney – crop up on “Frink,” and backward tapes are a highlight of “Come Close and Sleep Now.” Freed (by anonymity) from whatever expectations their respective fans might have, the players turned in performances that leaned more toward folk and a sort of jazz than the rock with which they were usually associated. And with its “likeable Northern accent,” the spoken-word “Mr. Tickle” sounds more like George Harrison than anyone else. (The liner notes relate a brief and charming story about the origin of the track’s subtle piano backing.)

“Do You Remember” is from the same end of the pop spectrum that brought the world “Maxwell’s Silver Hammer,” and one’s enjoyment of it can be predicted by how one feels about the Abbey Road track. But the lilting acoustic number “Please Don’t Run Too Fast” is more reminiscent of the sort thing brother Paul wrote in Rishikesh. Then as now, track sequencing is everything, and McGough & McGear is deftly bookended by its most rocking tracks, “So Much” and the album-closer, “Ex Art Student.” Though suffering from dodgy production decisions (on headphones, it’s so lopsided it might give one a headache), it’s a spry if slight number that benefits from the instrumental performances within it. Of special note is the obligatory psychedelic freakout midsection featuring Dave Mason on sitar and Hendrix on guitar, sounding not at all like himself.

More than a curio but less than a long-lost gem, McGough & McGear does remind us once again just how fertile the musical world was in the late 1960s. All sorts of left-field endeavors got recorded – it certainly helped if one’s brother was a Beatle – and it’s quite enjoyable (in a pleasantly lightweight sort of way) to listen to this long-forgotten record from that era.