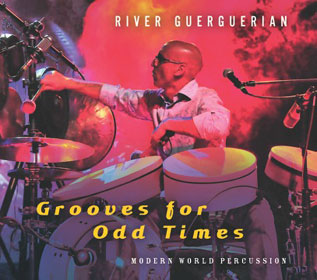 If you’ve ever witnessed or experienced it, you’ll remember. You’re in a church of some sort – or maybe it’s a community campfire gathering. Whatever: the musical accompaniment launches into something with a bit of folk or what they used to call “negro spiritual” in it. Something with a beat. People moved by the spirit (communal or extrasensory or chemical or whatever) decide to clap along. But the life history of these specific people contains little if any immersion in the rock and roll tradition, or in soul or r&b for that matter. So what happens?

They. Clap. On. The. Wrong. Beat. Instead of the two and four, they’re clapping on the one and three. It’s just so, so wrong, especially when they don’t even stay on their (wrong) beat.

The thing is, conventional wisdom holds that because many people don’t “get” rhythm, any music outside 4/4 or ¾ (or the occasional c&w clip-clop of 2/4) is inaccessible: don’t even bother creating music with polyrhythms, because in doing so, you’re working at something with which people won’t be able to relate.

That point of view is an oversimplification, of course. And there’s a very strong argument against that sort of thinking. The argument’s latest form is the new album Grooves for Odd Times by Asheville NC-based (but world-renowned) percussionist River Guerguerian. Sure, the numbers are in what many westerners would consider unusual time signatures – 32- and 17-beat cycles and so on – but there’s nothing inaccessible or intimidating about this music. The eleven pieces on the album are instead warm and inviting.

A look at the liner notes reveals that some of the tracks feature such traditional (to rock ears) instrumentation as electric guitar, electric bass, and “electronics” (sounds like analog synth to me). But with the exception of the electronics, none of those things is used in a traditional manner: these pieces are grooves more than songs. And that’s just fine: the modern instruments are employed as textural devices rather than delivery systems for melodies. In fact, when melodies do occur, they’re almost incidental: this is trance music.

And Guerguerian wants it that way. In those liners, he lists “compositional concepts” that include such phrases as “abstract tone arrangement,” “trance-inducing” and “heavy groove philosophy.” In the hands of some third-rate Mickey Hart wannabee, this would be so much pretentious stuff and nonsense. Not here: these tracks flow, throb and vibe with an organic quality. Even the vocalists – one of whom is highly regarded Asheville-based Kat Williams – are used as instruments. The singers aren’t “singing” in a traditional sense: they’re providing more of that (here’s that word again) texture.

“Overture Six” is the track that leans the most toward what one might call a rock sensibility: in places it sounds a bit like Obscured by Clouds era Pink Floyd. But only a bit, mind you. Like all of the tracks on Grooves for Odd Times, it’s wholly original. Even those on-the-one-and-three folks would dig this. Equally effective for use as background/mood “sonic wallpaper” (this it has in common with Brian Eno‘s ambient work) or as closely-followed intent-listening music, River Guerguerian’s latest album is, in a word, groovy.

You may also enjoy my 2009 feature on Free Planet Radio, one of Guerguerian’s many other projects.