In my occasional Blast from the Past blog entries, I take a quick look at notable reissues from notable recording artists — some you’ll recognize; some you probably missed. All are worth a closer look. 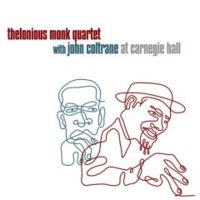 Jazz fans know that one of the most legendary collaborations in the genre was the string of live 1956-’57 Monk Quartet dates in which they were joined by saxophonist John Coltrane. Their gigs at the Five Spot Café have gained near-mythic status. Some of Coltrane’s studio work with the Quartet was released at the time, and the remainder of the sessions were compiled in the 90s on the expansive, 150-plus track Complete Riverside Recordings. All amazing, certainly. But what of live performances? Until recently, they remained a legend, a remarkable memory only for those select few who witnessed them.

But in 2005, Larry Applebaum at the Library of Congress was cataloging some old Voice of America radio broadcasts. “I noticed several tapes labeled ‘Carnegie Hall Jazz 1957,'” he recalled. “One of the tape boxes had a handwritten note on the back that said ‘T. Monk’ with song titles…my heart started racing.”

Not only is this two-disc set historically important and flawlessly recorded, but it’s some amazing music. Even to someone (like me, I must confess) who isn’t schooled in the genre, this set represents one of the high points in music. Essential.