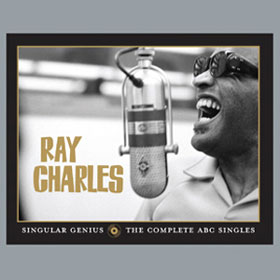 Quick: name a musical artist other than Ray Charles who could operate credibly in all of these genres: jazz, blues, gospel, soul, R&B, country and western, rock, pop. I’ve spent a bit of time thinking about this, and the only performer I can come up with is Elvis. And I’m not completely convinced that he meets the criteria. Regardless, even if you can come up with a name or two, chances are good that artist didn’t do it as well – or as often, or as consistently – as Ray Charles.

Ray was at a career high when he was wooed away from Atlantic by a lucrative, precedent-setting contract at ABC Paramount. His own boutique label (Tangerine), check. Ownership of his masters, check. His own orchestra, check. Of course ABC wanted hits, and he delivered pretty much right out of the gate, with “Georgia On My Mind,” his third single for his new label. Thus began Charles’ ascendancy as a crossover artist, capable of success in whatever style he chose.

As explained in Billy Vera‘s excellent liner notes for the new 5CD set Singular Genius: The Complete ABC Singles, in those days there really were two separate markets. To oversimplify just a bit to make the point, white folks purchased albums, and African Americans bought singles. Possessing a keen understanding of this dichotomy, Charles’ singles output differed a bit from what ended up on his LPs. Sure, the hits would land in both places, but especially on the b-sides, Ray catered a bit more to black audiences. In a very real sense, the 45rpm single was the coin of the realm for pop (popular) music.

Over time, some of those b-sides (non-album cuts) fell by the wayside catalog-wise. Some were appended to CD reissues, but others just sort of disappeared from availability in the digital age. That wrong has been righted by this new set. Fifty-three singles — both a- and b-sides – are collected on this beautifully-packaged set. Spanning Charles’ complete output for ABC, the set opens with “My Baby (I Love Her Yes I Do)” b/w “Who You Gonna Love.” This first single didn’t set the pop charts on fire, though it did reach #2 on the R&B chart. But it was a mere seven months later that “Georgia On My Mind” b/w “Carry Me Back to Old Virginny” struck gold.

Ray used whatever he needed in service of the songs: on some numbers it’s just him and a small band. On others The Raelettes provide background vocals, and a full orchestra graces many numbers. While his last top-ten pop hit of this era was a 1966 reading of Buck Owens‘ “Crying Time” b/w “When My Dreamboat Comes Home,” the high-charting hits continued on the R&B charts. The ABC period covered by this collection runs up to Charles’ last single for the label in April 1973. By that time he was more or less considered a MOR performer, but the material was of such a high standard that it has endured.

Not only does Singular Genius collect all of Ray Charles’ singles for the period, but exhaustive research has resulted in detailed personnel listings for every track. Recording and release dates and catalog numbers are also noted. Chart positions are not included here, and that’s fine: this set is more about the music than the merchandising.

For the Charles fan who has nearly everything, Singular Genius can serve as a gap-filling addition to the collection. For anyone and everyone else, it’s simply five-plus hours of damn fine music – Americana is as good a label as any, though it’s been appropriated by those traveling a much narrower musical path than Ray ever did – and a great gift idea.