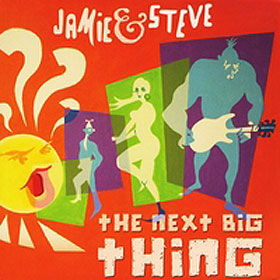 I could be wrong about this – this assertion is based on observation, not specific knowledge – but as of about 2010, I think that The Spongetones ceased operation as a recording unit, a creator of new material for release on albums. Whether that’s true or not – their last (final?) album Scrambled Eggs was released in 2009 – we have most definitely not heard the last from their well of creativity. In late 2009 an album called English Afterthoughts was released, credited to Jamie & Steve. Not a Six Million Dollar Man-themed duet outfit, the duo was instead Jamie Hoover and Steve Stoeckel, half of the Spongetones. That disc continued the peerless quality control of the ‘Tones, and carried on that group’s sonic expansion beyond their early Beatles-themed sound.

English Afterthoughts had, in places, a Chad & Jeremy flavor to it, and featured prominent use of the ukulele, an instrument not generally thought of as part of a rock’n’roller’s arsenal. (George Harrison, Tiny Tim and Agony Aunts notwithstanding.) The duo’s 2011 followup, an EP cleverly titled The Next Big Thing, builds on the sound of its predecessor. Imagine an exercise in what-else-can-we-try that happens also to have fine songs as its foundation, and you have The Next Big Thing.

“Seaside Sparrow” sounds uncannily like late-period XTC, if their alter egos The Dukes of Stratosphear set their sights on the White Album instead of Electric Lollipop. “Can We Start Again, Girl?” is Jamie & Steve at their most Spongetones-like, with a Spectoresque beat supporting the duo’s well-honed and flawless close-harmony vocal work. “Dancing On Ice” also recalls the ‘Tones, specifically the unusual vocal harmonies on “Now is Now” from 1991’s Oh Yeah! (the first CD I ever purchased, by the way). “Half a Mind” kicks off with pizzicato strings and scratchy-vinyl ambience, but soon heads into heavier rock territory. Then it veers back into English music-hall territory: this call-and-response/seesaw arrangement recalls one of English Afterthoughts‘ highest points, “Between the Lines.” In the end, it’s art-pop, Jamie & Steve style.

The soaring(!) “Over My Head” suggests a male version of Jackie DeShannon (with Jack Nitzsche arranging), and adds some lovely electric sitar lead work. Extended lyrical phrasing is the centerpiece of the title track, the final cut on the EP. It also features another Jamie & Steve hallmark: paired vocals so tight that you can’t tell who’s singing what. In the end, it doesn’t matter, ’cause it’s all great. “The Next Big Thing” scores extra points for its subtle use of a phase shifter. (Note that the word “subtle” and the phrase “phase shifter” rarely find use in the same sentence.)

The only criticism of The Next Big Thing I can muster is that it isn’t, well, bigger. Hopefully we won’t have to wait two more years for another clutch of immortal melodies from Jamie & Steve.