Album Review: Meyerman – Who Do You Think You Are? 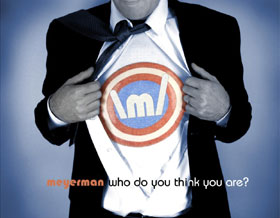 I’ve pretty well decided that powerpop is that sort of thing one either “gets” or doesn’t get. The oft-maligned subgenre isn’t likely to win over many new converts, despite the fact that its hallmarks — arena-sized hooks, catchy melodies, often wry lyrics, general exuberance – would seem custom-made to appeal to a wide audience. Put another way, if you think Fountains of Wayne, Cheap Trick and the Raspberries represent something of a pop apotheosis, then you “get it.” Otherwise, not.

Meyerman is a band from New Jersey, and not only do they get it, on Who Do You Think You Are? they give it. What they give isn’t revolutionary or new, not at all: Theo Meyer‘s voice sounds like a cross between Mike Viola and Chris Collingwood. Yeah, those guys. And the guitars ring out in that big way. Across the album’s thirteen track, listeners so inclined will find all of the usual powerpop tropes – the ones mentioned above, plus handclaps, soaring harmonies and crunchy riffs – galore. Ultimately, listeners don’t look to powerpop for musical innovation: they look for sturdy quality, and this album does deliver that.

There’s the requisite winkingly-clever lyrical content, too: titles like “Permission to Rock You” make it clear that the four guys in Meyerman don’t take themselves too seriously. But there’s a clear dedication to craft that shines through in all the songs. “Tour of Japan” conjures images of both Cheap Trick and Spinal Tap (both noted for being big in Japan, as it were), and “New Direction” is a self-deprecating look at the never-ending quest for success. “Xrayspex” edges closer to serious matters, but does so in a clever, sardonic manner. In fact, the generally upbeat tone of the album makes Who Do You Think You Are? something along the lines of what Mike Viola might have made if he were in a better mood. (Instead, he made Electro de Perfecto, reviewed here.)

Who Do You Think You Are? Is, in the end, a lot of fun. There’s nary a ballad on the disc: the guys keep things moving at a steady pace. Where some might dock the set for a certain sameness, I’ll call it consistency and recommend Who Do You Think You Are? to anyone who’s predisposed to dig powerpop. To the rest of you, it’s a genre thing; you wouldn’t understand. 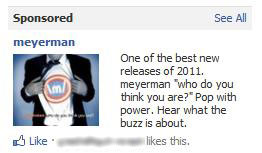 Note: Not one to be swayed by advertising appeals, I still found it interesting that this album is being promoted via an online ad campaign. The screencap at right (non-clickable) shows an ad that shows up frequently for me on Facebook.