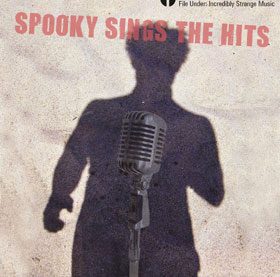 Here’s a little gem that has been tucked away in my collection for more than two decades. About ten years ago or so, I was cleaning out some old files when I came across a long-forgotten cassette tape. I received it from my kid sister circa 1988; she got it from a friend who — as the story went – worked in a recording studio. The actual tape is of unknown generation, but I can safely assume it’s no more than two or three generations from the studio master. Most of the hiss present was, I believe, due to the fact that my tape was a Type I with no Dolby® noise reduction applied.

But what to say of the music? It is definitely for fans of the incredibly strange. If you like Hasil Adkins, Jandek, Skip Spence’s Oar or perhaps the brief mid-70s Syd Barrett session(!) then you may find this recording of an anonymous singer/guitarist (both terms used in their loosest sense) compelling. If not, you will in all likelihood find it excruciatingly awful. You have been warned.

There’s some degree of technical proficiency here, though filtered through a warped sensibility beyond description. The slide guitar work is especially, um, interesting. The lyrical subject matter may offer some clue to the subject’s state of mind (especially tracks #4 and 5) but then again, perhaps not. He certainly has a good memory for the words to these songs.

I can only speculate as to the circumstances leading up to this recording session. My memory fails me; I don’t now recall if the story that comes to mind was of my own imagining, or if the story came (verbally) with the tape. But such as it is, our hero had a few bucks, and booked time at a local (Atlanta) studio. The engineer set up mics and levels, and let the tape roll. That sounds about right to me; this does not sound like a mid-80s home recording job. Sadly, there’s no real interaction between artist and engineer, so the circumstances will never be proven one way or another.

As far as changes to the source recording, I set the noise floor at 8dB and rolled off some tape hiss; this did not appreciably reduce the high end. Also the source tape’s balance was off (likely a result of the tape dub) so I boosted the right channel approximately 200%. Then I boosted the entire signal an additional 300% and trimmed one or two millisecond-long sections of oversaturation. There are a couple places on the tape where one channel seems to drop out completely; my best guess is that the engineer was amusing himself.

The entire session (or what circulates of it) is a mere 11:30 in duration; I’ve divided it into tracks and identified the songs where I could. This gent (whom I’ve nicknamed “Spooky” for reasons that will be become clear upon listening) covers Jimi Hendrix, Elvis Presley, Led Zeppelin, The Beatles, The Doors and more. I defy anyone to correctly name the last track*.