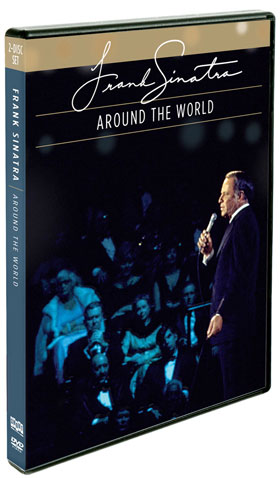 Even well into the rock era, plenty of spectacle surrounded a Frank Sinatra concert; it was an event. Though he was arguably past his prime, Sinatra had amassed such an unassailable body of work that he didn’t have much (if anything) to prove. At the end of 1970, he announced his retirement.

That retirement lasted very briefly; less than three years later he had returned, and a year after that he was mounting his highest-profile concert in ages. That concert, plus a pair that book-ended the retirement (and an additional one from a decade later) form a fascinating 2DVD set called Frank Sinatra Around the World.

The four concerts aren’t presented in chronological order; the first show is the Ol’ Blue Eyes is Back TV special from November 1973. So DVD viewers first witness Sinatra laying into some shtick about why he retired. His comic timing is good, but it’s nothing like his musical timing.

There’s plenty of that on display. Sinatra concerts are legendary for their variety, and this one is no exception. The man – backed by a reliably ace orchestra – runs through a wide selection of romantic ballads, punchy swingers, intimate saloon tunes and soaring classics. It’s fascinating to watch this show and realize that Sinatra carries the show with little in the way of visuals. It’s just him singing those songs. But the Chairman has a way of balancing artifice and sincerity, conveying the feeling that he’s singing for each listener. Ol’ Blue Eyes is Back features a pair of medleys, and Gene Kelly makes a delightful appearance on one of these. The associated routine allows the duo to poke a bit of self-effacing fun at themselves.

Yet in the end, the show as a whole is a tad stiff. The reason is fairly simple and obvious: the performance takes place on a soundstage with a small invited audience. The production aesthetic sometimes aims for a big concert feel, but really feels more like an extended set-piece from a variety TV show of the era. Dubbed applause is especially grating, and wholly unnecessary for what is, ultimately, a fine performance.

The second show provides quite a contrast. The Main Event was filmed live onstage at Madison Square Garden in front of a packed house. With all of the spectacle lacking in the Ol’ Blue Eyes is Back show, this show underscores the fact that Sinatra really was back. Perversely, a shouted and hackneyed introduction from Howard Cosell sets the right tone, although viewers may want to shout “STFU” at the screen as Cosell prattles on and on; the introduction is beyond over-the-top.

With that out of the way, Sinatra takes center stage and holds the audience in the palm of his hand for the next 50 minutes or so. He’s in much more animated form in front of this room of 20,000-plus adoring fans. He tears through a predictably varied set. Yet what’s fascinating is the subtle way in which the orchestra changes up the arrangements. Somehow they have more power here: they’re more sentimental on the ballads, they swing harder on the upbeat numbers. And Sinatra’s performances are sometimes radically different. He’s clearly riffing on the energy in the room as he charges through the songs. His ad-libbing (“crazy, koo-koo” etc.) would provide fodder for Joe Piscopo‘s impressions of him in later years, but here these detours are just fun.

Some edgy song choices might look gruesome on paper, but the Voice makes the contemporary numbers work surprisingly well. Jim Croce‘s “Bad, Bad Leroy Brown” and George Harrison‘s “Something” are both successful; the former in a kitschy way, the latter delivered full of emotion. And Stevie Wonder‘s “You Are the Sunshine of My Life” proves once again that a great song transcends genres.

Sinatra in Concert at the Royal Festival Hall has a very different feel. This 51-minute show from 1970 was originally broadcast on the BBC. Introduced by Princess Grace of Monaco, the show was one of Sinatra’s last before the retirement.

Princess Grace mentions the relatively recent hit “Strangers in the Night” during her introduction, but that song is absent from the evening’s set list. Several of the numbers from this show are found in other versions in the other concerts on the DVD set. But again, the arrangements and performances differ enough to keep things interesting. A couple of deeply sentimental songs – “I Will Drink the Wine” and “I Get Along Without You Very Well” may not rank among the Chairman’s most well-known songs, but he sings them like he means them. And the set highlights a particularly endearing characteristic of the man: he always makes a point – sometimes more than once – of identifying the composer of a given song, as well as the arranger responsible for that version. Some playful interplay with the orchestra adds to the enjoyability of this show.

A long instrumental medley with a kitschy, 80s-styled video montage provides the opening of Sinatra in Japan: Live at the Budokan Hall, Tokyo. This 1985 show is notable mostly for its rarity. Sinatra is well past his best years vocally here, so he carries the show more with his winning persona than with any particular vocal prowess. The phrasing genius remains, but the highs aren’t as high. Still a worthwhile performance, the song selection is something akin to a career-spanning overview. A couple late-period numbers (“L.A. Is My Lady”) fix the performance in time. “One for My Baby” is the set’s highlight.

The sound on all four shows is superb and crystal-clear; the video, less so. Owing to the source material, we get what we get. No amount of hi-def on the back end (DVD or Blu-Ray) can add to the visual quality that wasn’t there to begin with. Still, these aren’t visually bad; they’re just a bit indistinct and dated-looking.

Four hours of Sinatra is a lot, to be sure. But this two-disc set actually represents but a sampling of what’s available; in fact Around the World was originally part of a fourteen-hour box set of Sinatra performances. So if you enjoy these, there’s plenty more where they came from.