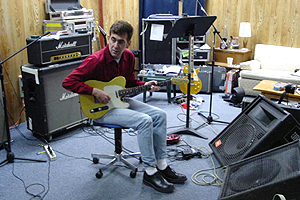 Consistency is often thought of as being anathema to creativity. Ralph Waldo Emerson famously asserted that “a foolish consistency is the hobgoblin of little minds.” Yet there are a special few in the arts, those who can both remain consistent and create enduring works of value. All that may sound a bit lofty when the subject is rock’n’roll, but there you are: Tommy Keene is just such an artist. From his earliest work as a solo artist –1982’s indie release Strange Alliance, a work that Keene all but disavows these days – to his latest (2011’s Behind the Parade), Tommy Keene’s music has distilled the best things about melodic rock into three- and four-minute slices of pop transcendence.

Perhaps consistent isn’t quite the right word, though. Behind the Parade is actually better than Keene’s last few recorded outings, high quality though they were. He has a signature sound: chiming guitars, the sturdy tempos, chord progressions that sometimes verge on anthemic, and the sound of your overdubbed vocal harmonies. Keene can be counted on for catchy rock songs that balance the oomph and power of rock while delivering emotional content that makes them more than run-of-the-mill powerpop, good as that may be. And he does so while navigating clear of formula. Tommy seems to agree. “I think this one nailed it,” he says.

He’s not afraid to depart from the trademark sound – or better said, to build upon it – and Behind the Parade is full of successful examples of that attitude. “Deep Six Saturday,” for example, uses horns, something one doesn’t find much on earlier records. “I always start with the music,” he explains. “In the old days, I’d make demos [first]. This record was done differently. We did the [real] drums last; I played to a drum machine. And when I had that song 70% finished, I ‘heard’ the horns.”

With its Mellotronish sounds, the moody instrumental “La Castana” sounds closer to Mike Oldfield or Brian Eno than what people have come to expect from Tommy. While it’s missing the elements of his distinctive voice and lyrics, it’s a really effective number, and it’s intriguing to think that he might continue in this direction on future albums. He chuckles when I ask him if it was a “get it out of my system” exercise. “I’d love to do a whole album of that sort of thing,” he laughs, “but it would be incredibly indulgent unless I was more popular.” 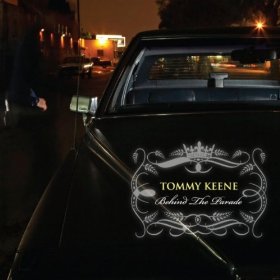 He explains that the piece grew out of “noodling around” on an old Baldwin Fun Machine (pictured on the album’s inner spread) he recently picked up. “The main inspiration for it, really, was the second side of David Bowie’s Low,” he admits. “I did the whole song last Halloween; I started at eight o’clock at night, and by four the next morning, it was done.” Remarking on the cinematic nature of that instrumental, Tommy says, “I – and eight thousand other guys — would love to do soundtracks. But it’s very competitive. If somebody who likes my music in general [asks me], I’m there.”

Though such stylistic departures are peppered across the disc, the bulk of Behind the Parade is filled with memorable, hooky, multilayered rock songs. While the songs might sound relatively simple on a casual listen, closer attention shows that there’s often a lot going on. On “Already Made Up Your Mind,” Tommy’s bass line moves under the guitar chords in a way that wordlessly telegraphs the track’s emotional element.

“Bass had always intimidated me,” Tommy says. “I didn’t really start playing until I got my home studio together, around ’03. I practiced, and it was really satisfying when I got competent. Because now I can play exactly what I’ve always heard [in my mind].” He jokingly characterizes his style as “Paul McCartney channeled through Jah Wobble.”

I unintentionally make Tommy cringe at my observation that – to my ears, at least — the faded-in fingerpicked guitar on “Nowhere Drag” is reminiscent of  “More Than a Feeling” by Boston. “It reminds me of the Smiths, but now that you say that…oh boy.” He says it’s his favorite song on Behind the Parade.

One of the supposedly big deals about Tommy’s major-label debut (1986’s Songs From the Film), was the fact that a big-time name (Geoff Emerick) produced it. Yet the production on Behind the Parade sounds even better, and the sleeve note reads “Recorded by Tommy at Home.” The direct approach seems to afford the truest results for Tommy. “I have a pretty minimal, bare-bones studio. I have all that I need to do everything but the drums and mixing. I have one really-good vintage mic, and I found it sounds the best on my voice; better than the mics in some very expensive studios.” But in the end, he credits the sonic success to his concentration on getting the right guitar sounds. “Now I get the guitars sounding exactly the way I want them. It’s all about guitars.”

There’s a timeless quality to the sounds on Behind the Parade; little on it feels as if it will become dated over time. “Some of my records sound dated — Songs From the Film, Based on Happy Times (1989) – but that’s because they were done in studios, and they wanted a hit, something that sounded like everything else on the radio.” 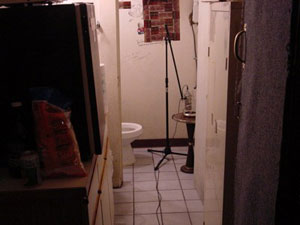 In a just world, the songs on Behind the Parade would be hits. Tommy agrees when I suggest that one of the secret weapons in his musical arsenal is the tambourine. That little percussive instrument mitigates any tendency his song might have to move into “power rock” territory. “I just mess around until I get the right sounds, until it all fits,” Tommy says. He also gives credit to his mixing engineer Walt Vincent, a man who knows what Tommy wants the songs to sound like. “This is the fourth album we’ve done together, counting the Keene Brothers record [with Bob Pollard of Guided by Voices].”

Consistent (there’s that word again!) with the timeless, classic quality of Tommy Keene’s music, Behind the Parade is also being pressed on vinyl. “It’s a real thrill” to have a vinyl album again, Tommy says. “I haven’t had a vinyl release since 1996. And I think a lot of people in my crowd are going to be excited; they’re going to buy the vinyl.” Speaking of vinyl, he mentions that he has some new old stock of his own. “I have a bunch of the [1984] Places That Are Gone EPs in my dad’s crawlspace,” he laughs. “We sell them at shows for fifteen, twenty dollars. I took a case out last time, and we sold out of them.”

Note: You may also enjoy my previous conversation with Tommy Keene.