CD Review: Jackie DeShannon – When You Walk in the Room 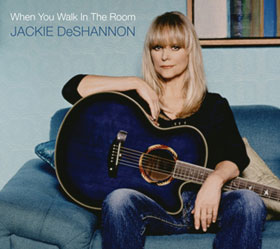 Count me among those who believe strongly in the proposition that a good song is a good song. What I mean is this: a well-written song can withstand reinterpretation in a genre quite different from the one in which it was written. Thus, an album of acoustic/bluegrass readings of Doors songs can actually hold up to listening. And in some cases, different versions of songs can actually reveal previously-unknown qualities of the composition, sometimes unintended by the writer. To wit: in concert, Frank Sinatra often performed George Harrison’s “Something,” and he made this song his own.

Some artists are more well-known as composers than performers. Paul Williams, Randy Newman, Jimmy Webb, Burt Bacharach…a full list would be long and impressive. Every so often a member of that exclusive club of treasured composers takes the time to cut an album of their own. Maybe it’s a collection of new material (as was Carole King’s Tapestry in 1971), or perhaps it’s a project like When You Walk in the Room, the new album from Jackie DeShannon.

The fact that DeShannon scored only three Top 40 hits to date in a career that began in the mid-fifties belies a more important fact: she has written some of the most timeless pop songs of the last half-century. For example, the mega-hit “Bette Davis Eyes” ranks among her most well-known (co-)compositions. But like much of her output, that song is better known as a hit by Kim Carnes.

Beginning with her self-titled debut LP in 1963, Jackie DeShannon has released many albums (many of these are compilations or soundtracks), and her own readings of her work are scattered liberally across those records. But on When You Walk in the Room, she sets out to bring the songs back to their core, back to their most elemental. Here – and with few and subtle exceptions – the only sounds you’ll hear are DeShannon’s voice and her acoustic guitar.

And it works. While rock-oriented listeners (a group that certainly includes myself) may occasionally pine for a bit of Rickenbacker jangle on “When You Walk in the Room,” a bit of percussion on “Needles & Pins,” some shoop-shoop backing vocals on “Breakaway,” or a bit of orchestration on her reading of the Burt Bacharach/Hal David pop classic “What the World Needs Now Is Love,” throughout this eleven-song album, DeShannon instead chooses to strip the songs of all that filigree, leaving behind just the songs themselves.

These songs are of a quality level such that they can handle it. Despite the spare arrangements, none of these versions sound unfinished or demo-like in any way; there’s a warm, intimate and soulful vibe throughout. The songs — whether written, co-written or previously covered by her – obviously mean a great deal to Jackie DeShannon, and that comes through. True, these versions likely won’t replace the other ones in your collection by her and/or others, but they do reveal a bit more about the songs (and the songwriter) themselves.