In Search of Sly Stone, Part One

In late June of this year, I received an electronic press release from one of my favorite music publicists. The message heralded an upcoming CD release from Sly Stone, an album to be called I’m Back! Family & Friends. Long a fan of Sly’s groundbreaking work with the Family Stone (most notably 1968-73), I was predisposed to be very interested. And the album’s title certainly got my attention: would this be a reunion (in whole or in part) of the Family Stone? 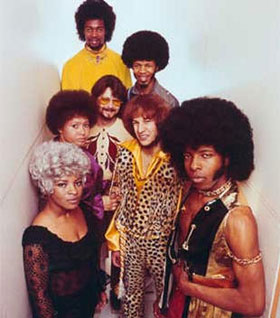 My own exposure to the man and his music was somewhat limited, but represented enough to equip me with some preconceptions. The music of Sly & the Family Stone was ubiquitous on AM radio of my childhood; in particular I recall being hooked by Sly’s clever use of a familiar schoolyard-taunting melody on “Everyday People” (Billboard #1 in 1969). Even if I didn’t know about Woodstock, I heard Sly’s songs, and although they weren’t similar in style to much of the other music I enjoyed (Mamas & the Papas, Turtles, Beatles), their appeal was undeniable.

Like anyone who followed music to any degree in the 70s and 80s, I knew of Sly’s reputation as a mercurial and unreliable character. But even with that knowledge I was taken aback during a particular 1982 episode. At the time I was dating a girl who was a big shot in her sorority. She ran with a pretty high-dollar crowd: expensive college, exclusive sorority. (How I ended up as even a bit player in such a narrative remains unexplained to this day. But I digress.) This Greek society had money to burn, I guess, so they had booked a big open area at the center of Atlanta’s Omni International, a sprawling urban mall of sorts, and then-home to indoor amusement park The World of Sid & Marty Kroft. (That property is now home to CNN, as it happens.) For the evening’s entertainment – somehow – the powers-that-be had booked Sly Stone and his band. No, really.

If you know anything about Sly, you know how this story would go. The band arrived, set up and did a sound check, all on schedule. But Sly was a no-show the entire evening; he finally strolled onstage a mere fifteen minutes before the whole thing was scheduled to end. And while my memory isn’t sharp on details of some events from nearly thirty years ago, I distinctly remember this about that fifteen-minute performance: it wasn’t memorable. 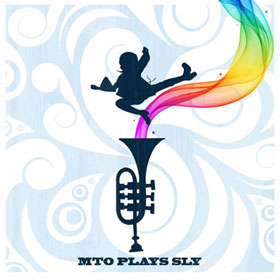 Still, Stone’s musical influence was undeniable, and it continues to this day. Besides the obvious debt that artists like Parliament / Funkadelic and Prince owe to Sly & the Family Stone, a diverse array of acts have taken a page or two from their musical approach. One of the more offbeat and interesting examples of this is a new album called MTO Plays Sly, by Steven Bernstein’s Millennial Territory Orchestra. Offering up a jam-funk-meets-big-band take on Sly’s music, MTO reinterprets the man’s music — both in instrumental and vocal-led form — for the 21st century. The disc points out the more timeless aspects of the source material, and proves yet again the axiom that a good song can stand up to reinterpretation in any number of styles.

Sly Stone is Back?
So it was with an all-too-common set of notions — great music, iffy performer — that I greeted that initial press release. Still, I was intrigued, and requested an advance copy of I’m Back! Family & Friends. I was also fascinated to learn that said friends included some pretty serious heavy hitters: Ann Wilson (Heart), Ray Manzarek (The Doors), Jeff Beck, Bootsy Collins, Carmine Appice (Vanilla Fudge et.al.) and Johnny Winter. On paper at least, this sounded like a super session might be in the making.

Some of those artists were willing to speak with me about their involvement with Sly’s new record. But, as I was cautioned by the publicist, Sly himself “will not be available.” I had to chuckle at that; I believe I actually said out loud to my computer screen, “Yeah, no shit.”

The disc arrived in the mail a few days later. This new record represented the first new music from Sly Stone since 1983’s Ain’t But the One Way, a failed and non-charting release that ended a string of “comeback” releases with too-earnest titles like Heard Ya Missed Me, Well I’m Back and Back on the Right Track. I approached the disc with an open mind, but Sly’s legacy hovered ominously in the background.

Before even removing the shrink wrap, I spotted potential signs of trouble. A sticker affixed to the cover listed some of the guests’ names – okay so far – but also noted that the music was “30 Years in the Making.” That gave me pause. Flipping to the back cover, I discovered that this fourteen-track CD took the “green” aesthetic very seriously: Sly and/or his producers were obviously very committed to…recycling. The first eight tracks were new versions of old Sly & the Family Stone hits (one of those eight was a remix of another). Three “new” songs were listed, followed by three more remixes (one of which was a re-re-mix, giving purchasers no less than three “new” versions of “Dance to the Music.” Uh-oh, I thought.

The breathless copy on the back also pointed out that on these tracks Sly was “aided by a cast of today’s music superstars.” Now, I mean no disrespect to any of the artists involved, especially as several of them rank among my favorites, but “today’s music superstars” is perhaps not the most accurate description of them. Still, reminding myself that it could be worse if the ad copy was accurate, I paused to thank the heavens that neither Lady Gaga nor Justin Bieber would be involved.

I was also a bit concerned about the graphics: the cover featured a painting of Sly circa 1970, and the back cover sported a photo of the man from roughly the same era. Looking inside the splashy packaging, I discovered more archival photos, including one that had to — I hope — be from the 1980s: Sly in festooned ball cap, sunglasses, Miami Vice stubble, and loads of oily “jheri curl” product in his hair. In sum: acceptable packaging for a retrospective, but where exactly was the 21st century Sly in all this?

The answer to that question would prove elusive, but I had hopes that conversations with some of the major players would fill in some of the blanks. I was curious as to how these major names got involved in this latest comeback. 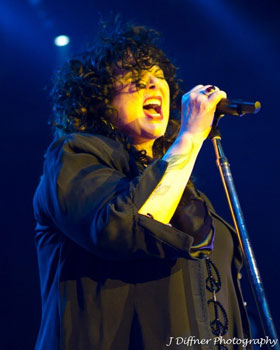 Ann Wilson
Heart’s Ann Wilson, who provides guest vocals on the new remake of “Everyday People,” put it simply. “Sly’s people reached out to me,” she says. “They sent over a track with Sly’s vocal on it,” she says. “I don’t know if it’s [Sly’s] vocal that they used, or if they fixed it up, or what.” While she insists that Sly’s vocal is “really great, really un-messed with,” it’s clear that her part was overdubbed in a separate studio, sent back, and mixed into the track by…well, by someone. Ann laughs and asks me, “Well, did you really think that Sly would show up for something? Maybe he would, but I don’t think you should count on it.” Hmm…so Ann knows Sly? Nope; never met the man. “I’m dying for the time when I hear his response to what we did,” she admits. In fact, at the time of our talk, Ann hadn’t even heard the final mix (or any of the other songs, for that matter).

All that notwithstanding, Ann’s vocal on “Everyday People” conjures the right vibe, and she delivers an expert and heartfelt performance. She says she was given her choice of songs, and chose this one because of its meaning to her personally. “This song really opened my eyes to the funk, and to what groove can be,” she says (though one might well ask how exactly “the funk” manifests itself in her own music). Ann reflects fondly on the influence of Sly & the Family Stone during the 70s, leading me to ask her if that group’s featuring of female performers inspired her own career choice. “I’ve got to be honest,” she says. “I didn’t really take that as my cue to think it was okay to do. You can cross that one off as being a big deal.”

“I think that Sly has turned all of that ‘unreliable’ stuff into an art form,” Ann observes. She wonders how much of it is “accident, theater, or the way he is.” 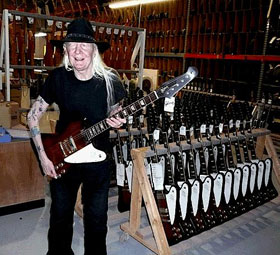 Johnny Winter
Bluesman Johnny Winter is known as a man of very few words, but I wanted to get his take on the new album. While the lead singer for Heart might be something of an odd choice for a Sly Stone record, the fiery Texas guitarist has perhaps even less in common with Stone and his music. But he applies his stinging blues licks to a rendition of “Thank You (Falettin Me Be Mice Elf Agin).” Johnny laid down his guitar part atop a finished (or semi-finished) track. “We weren’t in a studio together; [Sly] did his part in California, and I did mine in Connecticut.” Like Ann Wilson, Johnny hadn’t heard the finished product, but says, “I heard it when I did it.”

Hoping to draw a Sly Stone anecdote or two out of Johnny, I point out that both acts played a lot of festivals in the late 60s and 70s. He agrees but passes on the opportunity to elaborate. I ask him to comment on how Sly’s music has influenced his own. “It didn’t really have any effect on me,” he says in his plain-spoken manner. Some might say the reverse is true as well: on the remake of “Thank You,” Johnny’s distinctive guitar and voice are lost amidst the mix. The song is successful in and of itself, but uninformed listeners would be hard-pressed to discern Johnny’s presence.