CD Review: Mike and the Ravens – From Pillar to Post 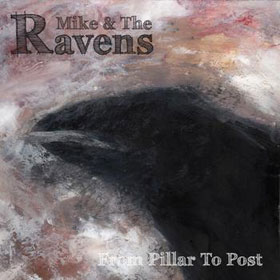 Nevermore, say Mike and The Ravens. Well, actually, it’s their producer Will Shade who says that this group of inimitable rockers won’t be making records to follow From Pillar to Post. That’s a shame, for us, but what they’re leaving behind is nothing short of great.

When an effective writer creates characters, he or she gives them an interesting back story. In my experience, crime writers often make their detectives Catholic; doing so is a quick and easy means of building in complexity, not to mention loads of inner conflict. American expat Will Shade may be a great writer (he writes some insightful reviews and features for Ugly Things magazine; I know that), but he didn’t have to draw on any of that part of his creativity with Mike and the Ravens. These guys come with their own back story.

I won’t recount that story here; if you’re interested, you can check out my 2009 review of their second album, No Place for Pretty. Suffice to say the sixtyish older guys in The Ravens have history.

All of that informs From Pillar to Post, but an understanding of their history isn’t a prerequisite to a full appreciation of this latest disc. Across a dozen tunes, the group stomps out some rock and roll that distills the influences of early rock’n’roll (specifically the variety found on such compilations as Loud, Fast and Out of Control), sixties garage-punk (especially The Monks) and, well, more modern (70s) punk. Put simply, Mike and the Ravens have come to rock you.

Shade’s production – in Finland and New York City — presents the band in a sympathetic light; the sounds are as razor-sharp as barbed wire, and he leavens an audio verite approach with just enough effects to keep things interesting. The four-piece band is ably assisted in various ways (most notably handclaps) by members of Them Bird Things, a Finnish group of quality fronted by Shade’s missus.

While all the songs are strong, a few are standouts. “Dog in Me” sounds like the aforementioned Monks if they dropped the banjos and soaked up more 50s r&b. The Stonesy vibe of “Greyhound Bus” distills the rootsy approach of John Hiatt into a four-minute sonic road movie. “Jack of Diamonds” takes an old device – audio crackle – and breathes new life into it. Overall, the band’s approach conjures mental images of the Mekons, if that group worked in some lyrical influence from Iggy Pop.

Many bands lay claim to playing “the real rock and roll,” but Mike and the Ravens make their case simply by doing it. And if From Pillar to Post is the last word from this group, at least they’re going out with a sonic boom.