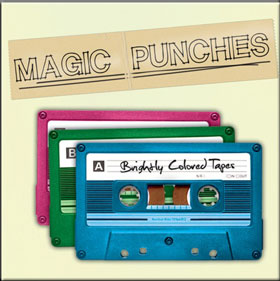 Quite a number of self-released releases find their way onto my desk for potential review. Considering one of them for said review presents a dilemma: some readers who happen by my blog will note their unfamiliarity with the name of the act, and thus choose to move on. And clearly one of my goals with this five-a-week column (now in its third year) is, y’know, to increase readership. Fair or not, for an indie release to make it into the “yes” pile, it has to impress more than a little. It has to sell itself.

So when I find a self-released disc that is (in my estimation, since I’m the house estimator around here) worthy of review, I take the chance. This is one of those cases. Portland OR-based Magic Punches has a disc called Brightly Colored Tapes. At seven songs, I suppose it should be termed an EP. The songs are of the modern-alternapop variety, but with a melodic sensibility.

The opener “Halloween Girl” kicks off with speedy drum loops and Coldplay-ish piano figures. Breathy vocals navigate musical territory that owes an equal debt to Radiohead and Ben Folds Five. Overall, the group’s approach isn’t far from what Dhani Harrison did with his group thenewno2: stuttering drum patterns that race along, bubbling under a melody that seems to run at a slower pace. That description might sound odd, but it works.

“Figurine” employs some almost-jazz chords and a more subtle drum approach, and shows that the band can mix some nice vocal harmonies into their songs with ease. A tasty analog-sounding synth line makes for a lovely hook upon which to hang the song. The track is quite radio-ready, and the high polish of the production belies the indie nature of the effort.

“LSFAFES” (I don’t know either; my best guess is “Love Song for a…”) reaches back to the 80s for its approach; the song has faint yet pleasing echoes of Max Eider and Aztec Camera. A lovely coda comes as a bit of a surprise to this, possibly the strongest track on Brightly Colored Tapes. “Castle” moves back toward piano-centric territory, with a sound one might find on an old 10cc record. “Second Guess” will bring a smile to anyone who knows who Owsley was; it features classic melodic construction and arrangement, and it’s quite catchy as well.

“The Glass Astronaut” is built upon a bed of Wurlitzer electric piano and those modern drum-loop things, and features a plaintive, yearning treated vocal. The track’s subsonic bass lines evoke groups like Air and Zero 7. A trilling guitar solo is icing on the cake. The disc wraps up with “The Thought of You,” which sounds uncannily like a Beatlesque Elliot Smith outtake circa XO’s “Baby Britain,” with the pop quotient dialed up a few notches. Few independent artists are capable of such ear candy; fewer still could end a set of songs on a high note of this caliber.