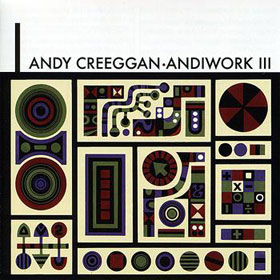 A subgenre of pop dubbed space age bachelor pad music enjoyed a brief resurgence among muso hipsters, anyway) in the 1990s. An act like Combustible Edison – who, in any other era (or, some wags would argue, a just universe) wouldn’t have gotten the time of day from a label like Sub Pop – put out albums in the style and shifted some units. The style of music is pretty broad, but it often encompasses techniques like cheesy, otherworldly keyboard (think not only Mellotron but goofy 60s/70s home organ) wide-panning stereo effects and assorted bleeps and bloops. Classic exemplars of the style include Esquivel and Martin Denny, but other artists have dabbled in the style (also called exotica, though that term also applies to some tropical-flavored variations on the bloop-bleep).

Andy Creeggan’s Andiwork III is a modern-day example of this style. The instrumental album features all manner of keyboard and electronic percussion; at times it soulns like Moog Cookbook doing original numbers instead of nutty covers of Nirvana and Offspring. There’s a strong thread of melodicism running through the set’s dozen tracks, and a funky (well, maybe not quite funky) vibe throughout. In his informative liner notes, Creeggan explains how the sounds were laid down, and from whence they came. Imbuing the album with a traditionalist feel, there are no samples, no MIDI. In fact the lack of MIDI and sequencing does give Andiwork III an organic, somebody-really-played-this feel.

“Inlaws” has that whole Parisian streetside café thing happening, and is probably the strongest, most endearing track on Andiwork III. Even though most of the tracks are  instrumental, Creeggan successful leavens the proceedings with healthy dose of humor. Not surprising considering he’s also a longtime member of Barenaked Ladies, an outfit known for a bit of the old snark. But there’s a serious side to the composer’s work shown on this set; the polyrhythms and ambitions arrangements make Andiwork III much more than hipster novelty. “Kid Crunch” sounds like 70s Brian Eno crossed with 70s blaxploitation soundtrack music, crossed with Sergio Mendes and Brasil ‘66. No, really. And with its exotic, distant vocalizing, “Memphré” is reminiscent of the Eno/David Byrne LP My Life in the Bush of Ghosts.

When you’re putting together music for the next cocktail party at your space-age bachelor pad, you could do far worse than Andiwork III. And yes, Andiworks I and II do exist as well.