Home  »  interview   »   Brotherhood: The Story Behind the Story

Brotherhood: The Story Behind the Story

In early 2010 I got a press release from a publicist with whom I often work. Collectors’ Choice Music (as of mid 2011, a defunct label) was putting together a 3cd compilation of all the A- and B-sides from Paul Revere and the Raiders. As a huge fan of them (and that sort of straight-ahead sixties pop/rock in general) I knew right away that I would want to review the set.

So I replied, And just for the heck of it – never expecting a positive response – I inquired whether Revere or lead singer Mark Lindsay would be available for interviews. An answer in the affirmative would be highly unusual: sixties artists are only very rarely involved in the reissue of their material. So I was quite surprised when the reply came back from the publicist: “Not sure. I’ll ask.”

What happened then exceeded my greatest hopes for the project. Revere wouldn’t be available – at least in the near-term – since he was attending to family medical issues. Mark Lindsay, however, was willing to do an interview. What’s more, the bassist from the band’s most popular era (1965-67), Phil “Fang” Volk, was also keen on speaking to me. And if that wasn’t enough, Roger Hart — the band’s manager during the sixties – was also available.

That was easy, I thought. So who else might be available? Well, drummer Michael “Smitty” Smith had passed away at the beginning of the last decade, and ace guitarist Drake Levin had lost his battle with cancer mere months before I started this project. But I did some checking on my own – not through publicists or agents – and easily located Jim “Harpo” Valley, guitarist from 1967, and Keith Allison. Still active in music (as are Valley and Volk), Allison had been a Raiders co-star on Dick Clark’s Where the Action Is and joined the Raiders in ’68, remaining for several years. Both agreed to interviews.

So now I had lined up a lot of conversations. At the time, my blog got a decent amount of exposure, but I felt that this developing story deserved a wider audience. I contacted the editors of Shindig!, a London-based magazine that focuses on sixties music and related forms. I had written several pieces for them before, including a short piece on Green Fuz, a long feature on ? and the Mysterians and a cover story on Barry and The Remains. This was arguably bigger, and they agreed. The feature would get the cover of an upcoming issue, and ranks among the most popular features ever to appear in the magazine. 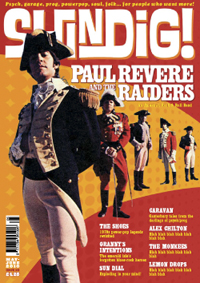 The resulting feature was one of my most-read pieces ever, and the entire project was a most fulfilling one. True, I didn’t get to speak to later-period Raider Freddy Weller and a few others, but other than missing out on speaking with Revere, I felt that what I got allowed me to paint a balanced picture for my readers. And in a moment of fan-boyishness, I sent my prized LP sleeve of The Spirit of ’67 on a trip around the country, getting it autographed by Lindsay, Volk and Valley. (Now framed, it hangs proudly on my living room wall.)

As it turned out, I became online friends with Ron Foos, bassist (for more than thirty years!) with the current lineup of Paul Revere and the Raiders. He was kind enough to set me and my daughter up with guest passes to a show. Thing is, the Raiders’ 2010 residency was in Branson MO, some 750 miles away from me. So I organized a pilgrimage/vacation, and we made a trip to Branson by way of (relatively nearby) Memphis, taking in Stax, Sun, and other sights in the process.

In Branson I got to meet Ron in person, and had a nice conversation with Paul Revere himself. Though not an interview-proper, it was nonetheless a delightful experience. I even got my photo taken with Revere. And since at that time my autographed LP was still making its clockwise circle across the lower 48, he was kind enough to sign another copy of The Spirit of ’67. 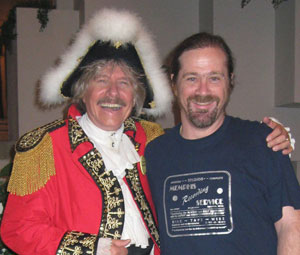 In my research on the Raiders, I discovered that the group’s most celebrated lineup had splintered in mid 1967, with three of the key members (bassist Volk, drummer Smith and guitarist Levin) leaving to form their own group. Called Brotherhood, the group pretty much sank without a trace in the musical marketplace of the late sixties. Their three albums had long since gone out of print, and had never been reissued on CD. But what I learned about their original goals – most of this information coming from the only surviving member of that trio, Phil Volk – suggested that the music was worth tracking down.

I remember one of the final issues of the late, lamented Musician Magazine, circa the mid 90s. “Get Ready for MP3,” one of the articles was titled. Wow: little did I know how much those portable little files would change the game. Thanks to an intrepid archivist, the three records that Brotherhood cut for RCA – 1968’s Brotherhood, 1969’s cleverly-titled Brotherhood Brotherhood and an oddball ’69 release credited to Friend Sound titled Joyride – were all available for download. This guy had ripped good quality MP3s from clean vinyl LPs. Legal? Um, no. But music wants to be free (not in the monetary sense, rather in the being-heard sense) and I found it.

And it’s good stuff. The group’s story had never been told, and what has been written about them is based largely on third-hand reports and conjecture. So — with a referral from a friend and fellow writer whose work I admire — I decided to pitch the idea of an in-depth story on Brotherhood to Mike Stax of Ugly Things Magazine. To my surprise, he knew about Brotherhood. In fact he had played a gig with Phil Volk several years ago. 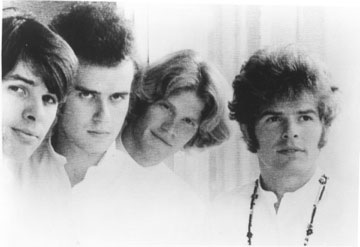 I got busy. By now Phil was a friend of mine — the guy can talk, let me tell ya – and so when I told him my plans he was very pleased. I got in touch with Drake’s widow Sandra, and she agreed to be interviewed as well. Drake had given a few interviews over the years, but he had rarely spoken about Brotherhood; I really wanted his perspective, so his wife of thirty-plus years was the logical go-to person. I also contacted a very nice woman who was Smitty’s wife in the 70s; she didn’t have much to offer but was willing to help any way she could. Eventually Sandra put me in touch with Drake’s first wife. In the end I conducted about ten hours’ worth of interviews specifically for this project.

I was also able to draw upon my 2010 interviews with Jim Valley, and with Roger Hart. So that left only Brotherhood keyboardist Ron Collins unrepresented. I stumbled across a comment on a YouTube video suggesting that someone knew someone who knew Collins. Long story short – and I do mean long story – I eventually heard from Collins in fall 2010. He doesn’t go by the same name he used in the 60s. He initially agreed to an interview, then thought the better of it. I persisted gently but eventually gave up.

Lee Michaels’ name came up in my interviews and research. He had a big hit in 1971 with “Do You Know What I Mean,” but left the music business a few years later, and lives in relative seclusion. I knew someone who knew the keyboardist, and reached out, but got nowhere. “He’s a very private person,” I was told.

Lots of other names came up, and although I had 8000 words to work with, the core story itself is sprawling, and a lot of those names didn’t make it into the final piece. For example, Brotherhood jammed with Jimi Hendrix. That kind of thing. Very interesting tidbits that didn’t have much meat on ‘em: (“Really? Did you record any of it? Any photos?” “No.”)

There’s a lot I wasn’t able to say about the songs themselves; I tried to let the band (well, Phil) speak for the music as much as possible. Right toward the end of the project, many months having elapsed, I decided to take one more shot at Ron Collins. I advised him of the mass of research and interviews I had completed, and suggested that this was pretty much the only chance to tell his version of the story. As fascinating as the Brotherhood saga is, nobody had bothered to try and chronicle it before now, and two of the four original members have already passed away. I sent the note and forgot about it.

Over a month later I got a reply. It wasn’t the sort that invited further discussion, but he did fill in some blanks in the story, and I am grateful for his perspective. I’m a big fan of the film Citizen Kane – everything about it – and at times during this project I’ve felt like the unseen reporter (played by Alan Ladd, as a matter of fact). Never clearly seen and not part of the story itself, he’s nonetheless the glue that brings the whole thing together.

I storyboarded out the feature, assigning rough (and flexible) word counts to each of the topics I planned to cover. And then I set about writing. Surprisingly, without actually referring to that storyboard, my first draft — completed in just over 48 hours – adhered very closely to it.

My deadline isn’t for several weeks yet. At this point I’ve set it aside, and will look at it again in several days, hopefully with fresh eyes. Meanwhile, I’ve managed to collect some good images for the story; I tracked down all three LPs, so I have cover art images. I have some good photos from the Raiders project, and Phil Volk has been kind enough to supply images from his personal archive as well.

The feature will be in Issue #32 of Ugly Things, out this summer.

Late breaking news: I think I might just have located Joe Pollard, the drummer who replaced Mike “Smitty” Smith for the group’s last record, Brotherhood Brotherhood. It’s very much a “power trio” album. I’ll be interviewing him shortly and will work his perspective into the feature.