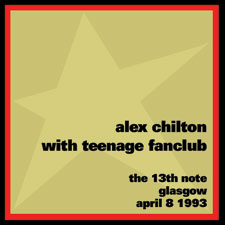 Here’s a recipe for success. Take an American 70s cult icon, one notorious for erratic performances, and add a healthy dose of one Scottish revivalist pop band that mixes equal parts noise, distortion and ethereal harmonies. What do you get? Well, you could get a trainwreck. But in this case you get Alex Chilton, former frontman of 60s poppers The Box Tops, and (more importantly) leader of mega-influential-but-didn’t sell 70s legends Big Star, onstage this night with Teenage Fanclub. Recorded and broadcast for the Scottish BBC, this 1993 set is really a Chilton showcase. The Fannies know their Big Star, and run through great tracks like “September Gurls” and Chilton’s “Free Again” with relish. In doing so they make a good case for serving as the new Big Star, but in the end Chilton chose another group of 60s pop fanatics (The Posies) for that role.

Chilton (who sadly passed away in 2010) is at the peak of his powers this night, and actually seems to be enjoying himself (not a given when speaking of Chilton performances, it must be noted). Ad the guys in TFC seem about to bust for all the fun they’re having, freed for the evening from purveying their own ace tunes.

The set is all over the map stylewise — covering everything from the Joe Meek production “Telstar” to early Frank Zappa — and that’s a good thing. Meanwhile, as a neat bonus, “The Alex Chilton Trio” comes back onstage and plays a half-dozen cocktail-jazz and retropop numbers in the style of Chilton’s then-current release, Clichés. An eclectic set from an artist known far and wide for his eclecticism. All in all, a transcendent set. Note: there circulates a wonderful set of unreleased studio sessions with Alex and TFC that is well worthwhile, but it’s impossibly rare. This live set, however, can be found fairly easily if one knows where to look.